161 colonic biopsies were analyzed from 36 CD and 26 UC patients (from inflamed and non-inflamed mucosa per subject), and 14 HV. Unbiased gene expression analysis by principal component analysis and hierarchical clustering showed upregulation of known inflammation markers and inflammasome components. In inflamed mucosa mRNA levels of CD40 (figure), CD154, CD44, CD86, KYNU, FCRL4, and others revealed a significant consistent upregulation of the CD40/CD154 pathway. Representative corresponding IHC stainings confirmed the upregulation of CD40 and CD154 at the protein level showing strong expression of CD40 in lesional biopsies (inflamed areas and epithelial cells), moderate expression in non-lesional and low in HV biopsies (no expression in epithelial cells), while higher expression of CD154 was observed in lesional and non-lesional biopsies compared to HV. 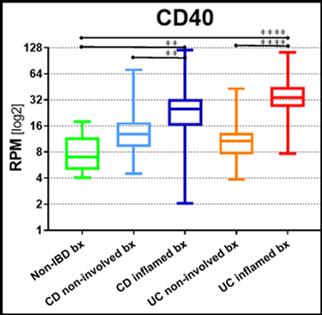 Consistent upregulation and activation of the CD40/CD154 axis was observed in inflamed mucosa of patients with IBD. Together with other (pre-)clinical evidence pointing to the importance of CD40 signaling, manipulation of this pathway might be a potential therapeutic target in IBD.