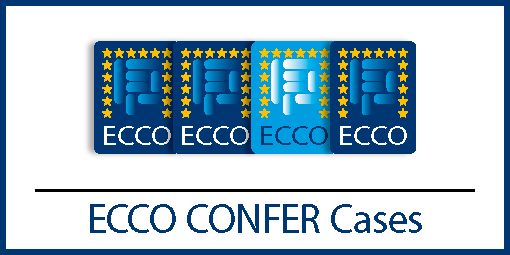 Unique and extraordinary clinical cases are generally reported in the form of a single case report or a small series, making it hard to derive clinical conclusions on modes of presentation, diagnosis, and treatment.

What is ECCO CONFER Cases?

The ECCO CONFER Cases are based on an initiative introduced by the European Crohn’s and Colitis Organisation (ECCO) to support individual investigators in developing rare case series by collecting enough similar cases among the IBD Community. By joining forces of the many members and supporters of ECCO, a joint report of all similar such cases can result in a large case series that will advance knowledge on these uncommon patients.

A call will be made once a year to all ECCO Members to propose CONFER case projects. Two to four cases will be selected by the CONFER Steering Committee.

The proposing investigator will act as PI and develop his/her case into a CONFER case project with the support of a member of the CONFER Steering Committee.

A call will then be made to all ECCO Members and affiliates who have encountered a similar case to contribute their case to the CONFER case series.

All received cases will be joined into a case series by a PI and prepared for publication.

ECCO’s support includes dissemination of a call for similar cases, as well as assessment of the feasibility of the cases by the ECCO CONFER Steering Committee. It does not include any financial support nor any input in the collection of the data, the analysis or the publication of the data collected.