T resident memory (Trm) cells in the intestinal mucosa and in particular subpopulations expressing phenotypic markers such as alphaE-beta7 or NKG2D have been associated with chronic inflammatory bowel disease (IBD) activity. We hypothesize that these populations may have a direct deleterious impact on the intestinal epithelium in IBD.

The phenotypic study of mucosal lymphocytes was performed in two prospective cohorts: ELYP including patients with active IBD before initiation of biotherapy and REMIND including patients with ileal Crohn's disease (CD) requiring ileocaecal resection. These analyses were performed before initiation of treatment and one year after continuous therapy in the ELYP cohort and on the resection specimen in the REMIND cohort. An innovative ex vivo autologous organoid-mucosal T cell coculture model was developed using the REMIND cohort specimens for patients and healthy ileum from individuals without IBD for controls (Figure 1). T cell infiltration within the organoid and epithelial cell death were assessed by confocal microscopy. A panel of 30 cytokines was quantified in the supernatants of cocultures.

In the ELYP cohort, before the start of treatment, IBD patients had lower expression of alphaE-beta7 and NKG2D on mucosal CD8 T cells. While alphaE-beta7 and NKG2D expression on mucosal CD8 T cells had returned to normal in endoscopic responders, it remained decreased in non-responders. Similarly, the inflammatory mucosa of the REMIND surgical specimens had lower levels of CD4 and CD8 T cells expressing alphaE-beta7 and NKG2D compared with controls and non-inflamed regions. We developed a coculture model between mucosal lymphocytes and organoids generated under autologous conditions. We showed an increase in apoptotic cell death in epithelial cells from CD patients which was not found in control cocultures. There was a significant correlation between the degree of epithelial cell death and T cell infiltration (Figure 2). Various proinflammatory cytokines such as IFNgamma, TNFalpha, IL-6 and IL- 17a were also increased in the supernatants. The use of antibodies blocking the alphaE-beta7 and NKG2D pathways of interest inhibited this effect by different mechanisms (Figure 3) While anti-beta7 and anti-NKG2D had comparable effects in terms of cell death inhibition, only anti-beta7 reduced T cell infiltration. Anti-NKG2D had no effect on cell infiltration but a reduction of perforin was observed in the supernatants. 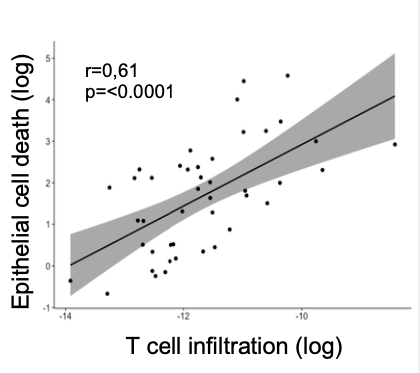 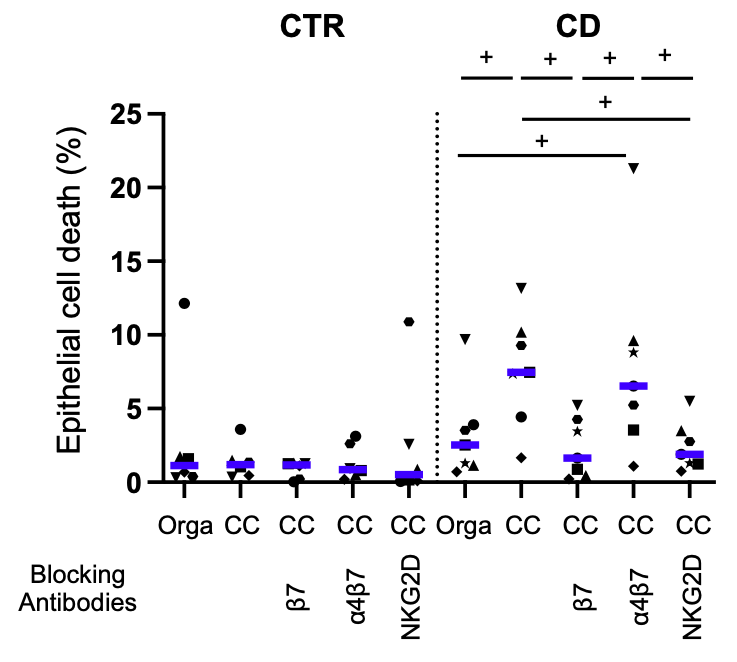 These data demonstrate for the first time the direct cytotoxic deleterious effect of mucosal T cells on the epithelium of CD patients using a novel coculture model. AlphaE-beta7 and NKG2D pathways appear to be relevant in this process.