Neutrophil extracellular traps (NETs) are structures constituted of DNA filaments and protein granules, extruded by neutrophils after various insults, such as chronic inflammation. Their formation is dependent on the citrullination of histone H3 (H3cit) in the nucleus by peptidylarginine deiminase 4 (PAD4). The pathogenic effect of NETs in Crohn’s disease (CD) has been poorly addressed so far. Recently, a profibrogenic role of NETs has been proposed in the lung.
The aim of the present study was to assess whether NETs may trigger the fibrotic process in patients with CD.

Multiplex immunofluorescence (M-IF) for PAD4, myeloperoxidase, neutrophil elastase, H3cit, vimentin and alpha-SMA were performed in unaffected, inflamed and fibrotic ileum of patients operated for stricturing CD. From the same patients, primary intestinal fibroblasts (PIF) were cultured from unaffected ileum.
NETs were obtained from healthy volunteers’ neutrophils, incubated with 50 nM phorbol myristate acetate for 3.5 hours. Subconfluent PIF were stimulated in vitro with NETs for 6 hours and RNA extracted for sequencing (RNAseq). Cell culture medium was collected for soluble collagen analysis, using SIRCOL®. Experiments were replicated in 5 patients.
CCD-18Co cell line was used to test the migratory activity of fibroblasts with a scratch test and to confirm the expression of profibrogenic proteins, such as fibroblast activation protein (FAP) and collagen 3A1.
M-IF was interpreted using computational analysis. Statistics was performed with Kruskal-Wallis Test for collagen quantification, with p < 0.05. For RNAseq, Poisson distribution and DESeq2 were used, with significance set at Q < 0.05; the resulting gene list was then analysed with ClueGo® software.

M-IF showed that NETs were primarily found in inflamed areas, with clusters of these traps located close to intestinal myofibroblasts in the deeper submucosa layer (Figure 1).
The gene ontology of RNAseq (Figure 2) showed significant upregulation of profibrogenic pathways of TGFB1/SMAD and p38/MAPK in the group of PIF co-cultured with NETs.
NETs stimulation determined a higher release of collagen in the medium (p = 0.003), and an increase in the protein expression of FAP and collagen 3A1 in PIF. Accordingly, NETs profibrotic effect resulted also in a slower migratory ability of activated fibroblasts. 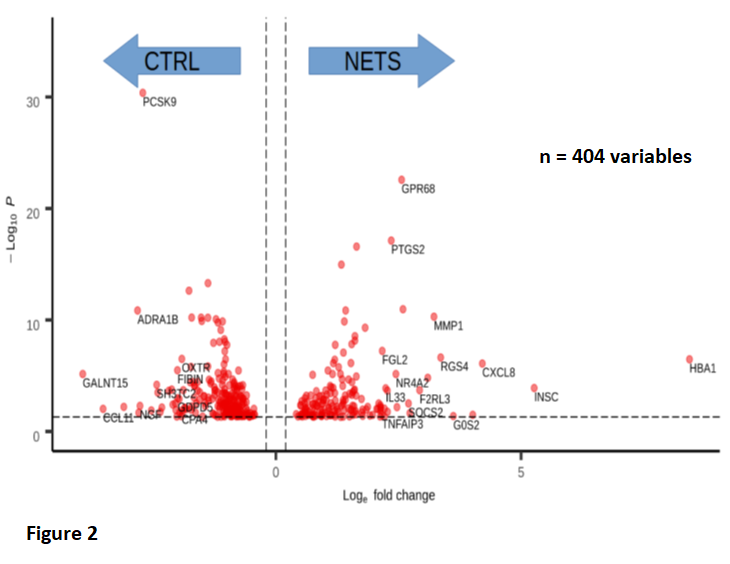 Our data show that NETs are produced during active inflammation of CD and their colocalisation with intestinal myofibroblasts suggests that they may represent an early trigger of fibroblast activation. Clinically, the inhibition of PAD4 might result in both contrasting inflammation and fibrogenesis. An in vivo chronic model of colitis on PAD4-KO mice is ongoing to confirm these findings.