Bowel urgency is the symptom described by patients as having the most impact on quality of life but is missing from most disease activity indices (Carpio et al., 2016). The Communicating Needs and Features of IBD Experiences (CONFIDE) study aims to increase understanding of patients’ experiences and the impact of IBD on their lives in the United States (US), Europe, and Japan. These data focus on US patients with moderately-to-severely active ulcerative colitis (UC).

An online, quantitative, cross-sectional survey was conducted with patients with moderately-to-severely active UC in the US in July 2021. Data included patient perspectives on their UC symptoms and the impact on their social life, work/school life, and ability to participate in sports/physical activities. Moderately-to-severely active UC was defined based on treatment, steroid use, and/or hospitalization history. Descriptive statistics (frequencies, percentages) summarise the data. 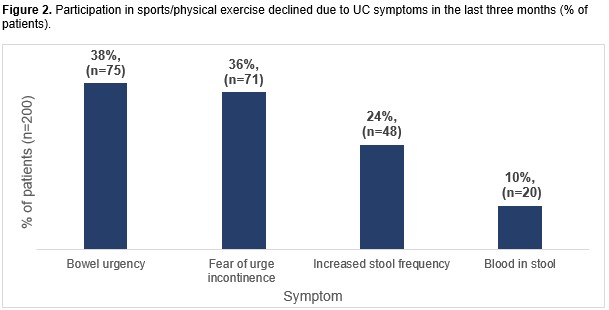 Bowel urgency and fear of urge incontinence are the most reported symptoms leading to patients with UC declining participation in work/school, social events, and sports/physical exercise. Over three quarters of the surveyed patients reported wearing diapers/pads/protection in the past three months due to fear of urge incontinence and only 22% of patients who had ever suffered from bowel urgency reported that it had no impact on work or school.