Crohn´s disease is a chronic inflammatory disorder of gastrointestinal tract that is classified into three different behaviours: the inflammatory (B1), the stenotic (B2) or the penetrating (B3). We pretend to identify differences in transcriptomic and non-long coding RNA expression profiles associated to damaged and no-damaged surgical ileal resections from complicated CD patients.

We conducted both RNA and small RNA sequencing profiling on ileal surgical resections from CD patients with structuring (n=10) or penetrating (n=10) behaviour; from each patient we obtained a sample from affected tissue (B2A and B3A, respectively) and the paired non-affected ileum (B2C and B3C, respectively). Ten ileal resections (control samples) were obtained from non-affected ileum of patients with right colorectal cancer (IL). Enrichment scores of the GO terms and KEGG pathways were used to functional analysis investigated in this study. Gene expression and miRNA profiles were validated by RT-qPCR.

Our comparative bioinformatic analysis of RNA sequencing showed that the comparation of IL and the non-affected ileum from CD patients (B2C+B3C) revealed that only 11 genes were significantly altered and any miRNA with significative expression. The comparative analysis between B2A+B3A vs B2C+B3C showed: a) 2562 genes differentially regulated and the GO enrichment analysis determined that inflammation, cell activation, and regulation of the extracellular matrix (EM) were the main biological processes altered (Figure 1a). KEGG analysis showed that cytokine-receptor interaction and MAPK and Ras signalling were the most affected pathways (Figure 1b). Among the top ten up-regulated genes we found several immunoglobulins (such as IGHG4, IGHG3, and IGHG1), proteins of the extracellular matrix EM (such as EPYC, COMP, and CHI3L1), and transcription factors (such as PRRX1). When the analysis was performed by CD behaviour, results revealed that most of these genes were significantly increased in both, B2 and B3 CD; b) 103 miRNAs with differential expression, 56 were up-regulated and 47 were down-regulated. Negative and significant correlations were detected between the RNA expression of ECM components and some miRNA expression. 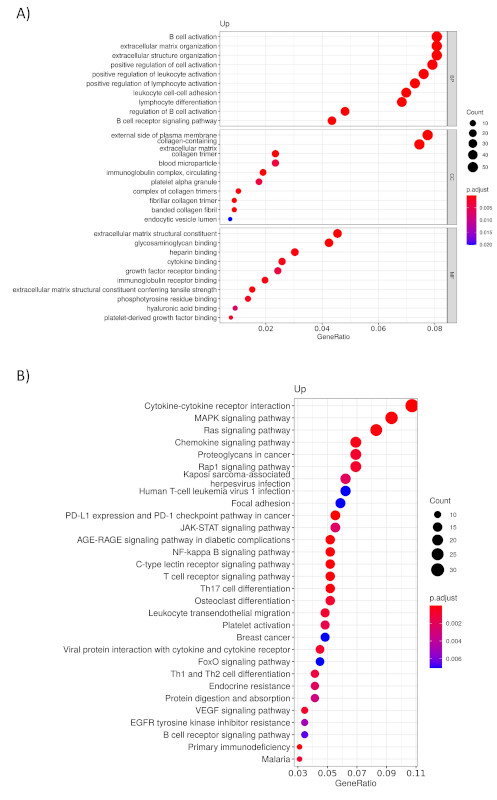 The correlation detected between extracellular matrix components and some miRNA suggest an epigenetic regulation in the affected ileum of complicated CD patients.