Racial disparities in inflammatory bowel disease (IBD) phenotypic presentations and outcomes are recognised. However, there are conflicting data from Western population-based cohort studies as to whether racial differences in colitis-associated colorectal cancer (CRC) incidence exists. To our knowledge this is the first study to investigate the impact of ethnicity on the natural history of dysplasia in ulcerative colitis (UC).

We performed a retrospective multi-centre cohort study of adult patients with UC whose first low-grade dysplasia (LGD) diagnosis within the extent of colitis was made between 1 January 2001 and 30 December 2018. Only patients with at least one follow-up colonoscopy or colectomy by 30 August 2019 were included. The study end point was time to CRC or end of follow-up. Statistical differences between groups were evaluated using Mann-Whitney U tests and Chi-squared tests. Survival analyses were performed using Kaplan-Meier estimation and multivariate Cox proportional hazards models.

408 patients met the inclusion criteria (see Figure 1 for patient and clinical demographics). More patients from a Black or Asian (BAME) background progressed to CRC [13.4% vs. 6.4%; p=0.036] compared to their White Caucasian counterparts, despite having surveillance follow-up. Figure 2 displays Kaplan-Meier curves demonstrating the probability of remaining CRC-free after LGD diagnosis and categorised by ethnicity. BAME patients were more likely to have moderate-severe inflammatory activity on colonic biopsy within the 5 preceding years [42.0% vs. 28.9%; p=0.023], but no significant differences in medication use and a longer median time interval from LGD diagnosis to colectomy date [32 months vs. 11 months; p=0.021]. After adjusting for sex, age and UC duration at time of LGD diagnosis and presence of moderate-severe histological inflammation, being Black or Asian was a predictive factor for CRC progression on multivariate Cox proportional hazard analysis [HR 2.97 (95% CI 1.22 – 7.20); p = 0.016]. However, ethnicity was no longer predictive of CRC progression on sub-analysis of the 317 patients who did not have a colectomy during the follow-up period. 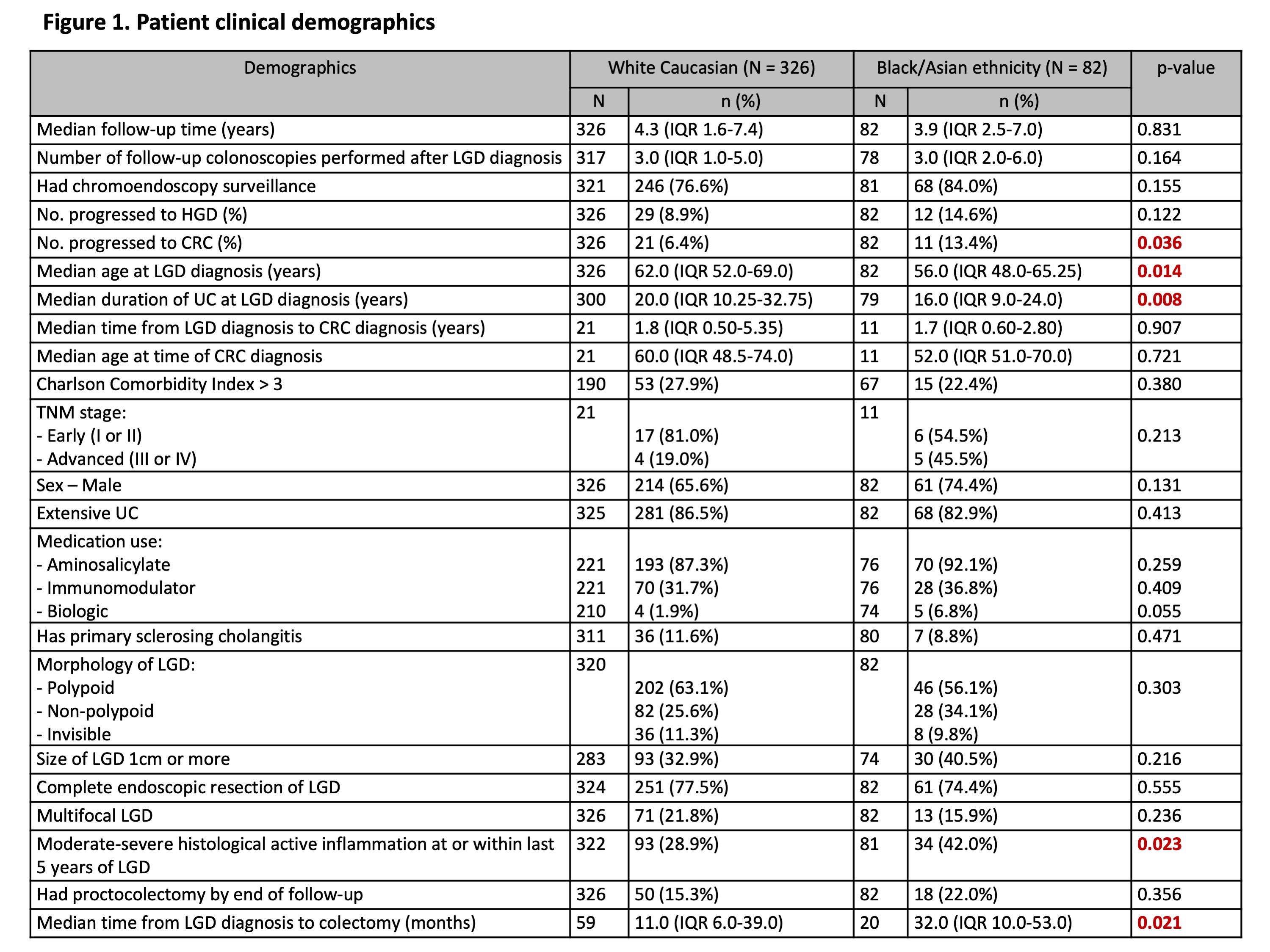 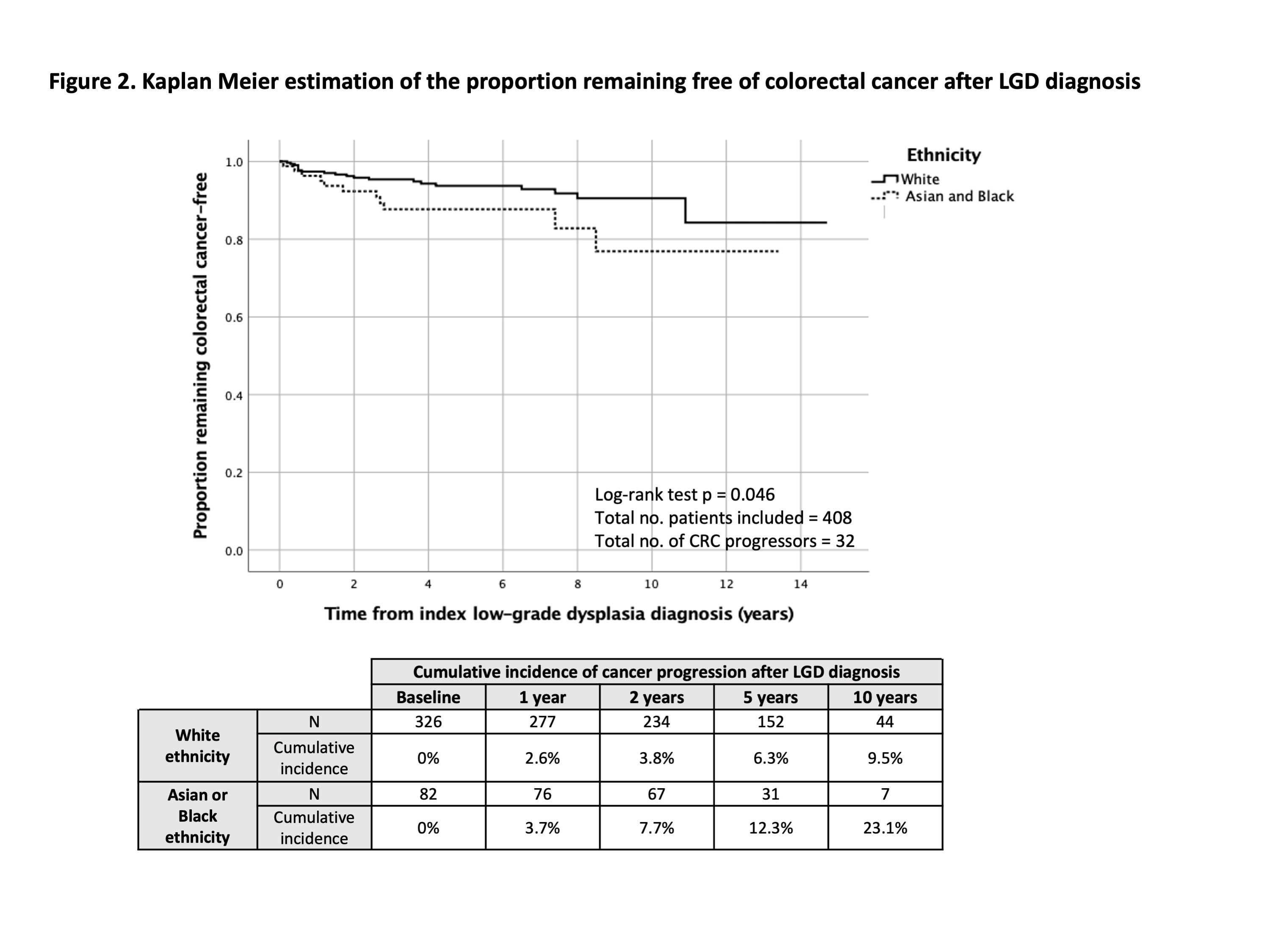 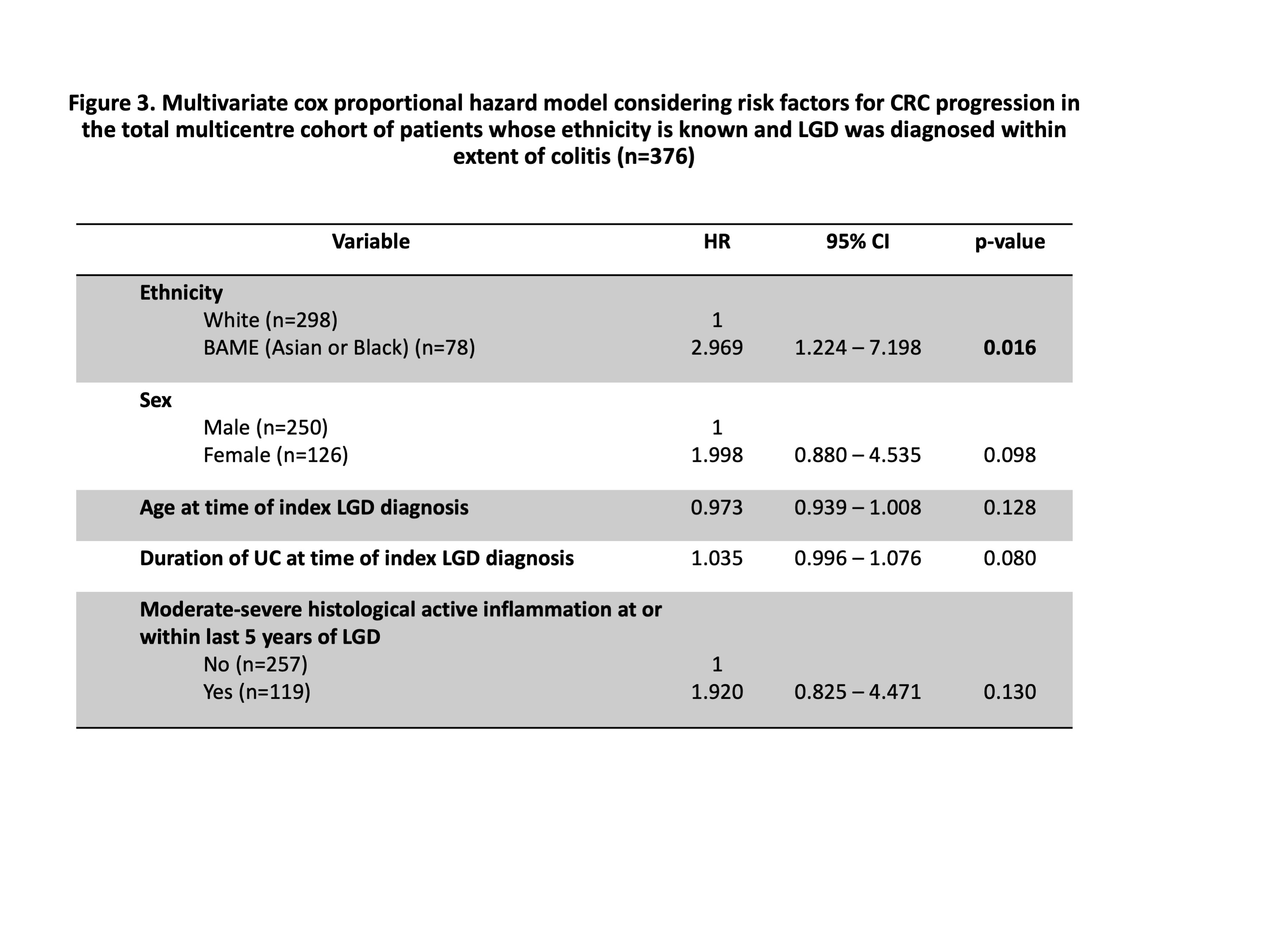 In this UK multi-centre cohort of UC surveillance patients diagnosed with LGD, delays in receiving cancer preventative colectomy may contribute to an increased CRC incidence in certain ethnic groups. Further work is required to elucidate whether these delays are related to institutional factors (e.g. inequity in the content of decision-making support given or access to healthcare) or cultural factors.