Previous studies have shown proximal extension (PE) rate of ulcerative proctitis (UP) is approximately 50%. This rate teach us  the importance of treating UP adequately. Basically, we have to treat them with topical 5-ASA. But in clinical practice, we sometimes experience the case whose inflammation remain endoscopically, even though the symptoms have been relieved. Should we strengthen our treatment at this situation, especially inflammation at lower rectum?  We aimed to know PE rate of lower rectal UP and optimize the treatment.

We retrospectively investigated the medical charts of patients with UP from 2010 to 2020 at Kenseikai Nara Coloproctology Center. We excluded the patients with UP shrinking from left-sided or pancolitis as a result of the treatment. The cases with missing value were excluded too. Variables of interest included gender, onset age, disease location, initial mayo endoscopic subscore (MES) and treatment, and the time to PE. To compare the cohorts we used Fisher's exact test and Mann-Whitney test. Proximal extension free survival (PEFS) was calculated using the Kaplan-Meier method.

Sixty-five patients were recruited. Mean age was 42 years old, the ratio of males to females was 1.17. The number of lower rectal UP patients at first examination was 24. We observed MES 1 inflammation for 30 patients, and MES 2 for 35. Median follow-up duration was 73.5 months. PE occurred in 34 patients: 28 patients had left-sided colitis and 6 had pancolitis. Fifty-four patients were medicated and other 11 patients were just observed. Among the patients medicated, 23 patients were took only topical drugs, 18 were took only oral drugs and other 13 were took both. We couldn't find any relationships between initial medication and PE rate. The multivariate analysis revealed that having peri-appendiceal red patch and lower rectal UP were reduce the risk of PE. MES was not related to PE (table 1).

Table 1. Relationships of each covariate to proximal extension

PEFS at 1 year, 2 year are 81%, 81% for lower rectal UP (Rb group), and 66%, 61% for the patients having the disease beyond middle Houston’s valve (Not-Rb group), though we couldn't find significant difference (Fig.1). Among 34 patients having PE, we used biologics for only five patients and got their inflammation under control. 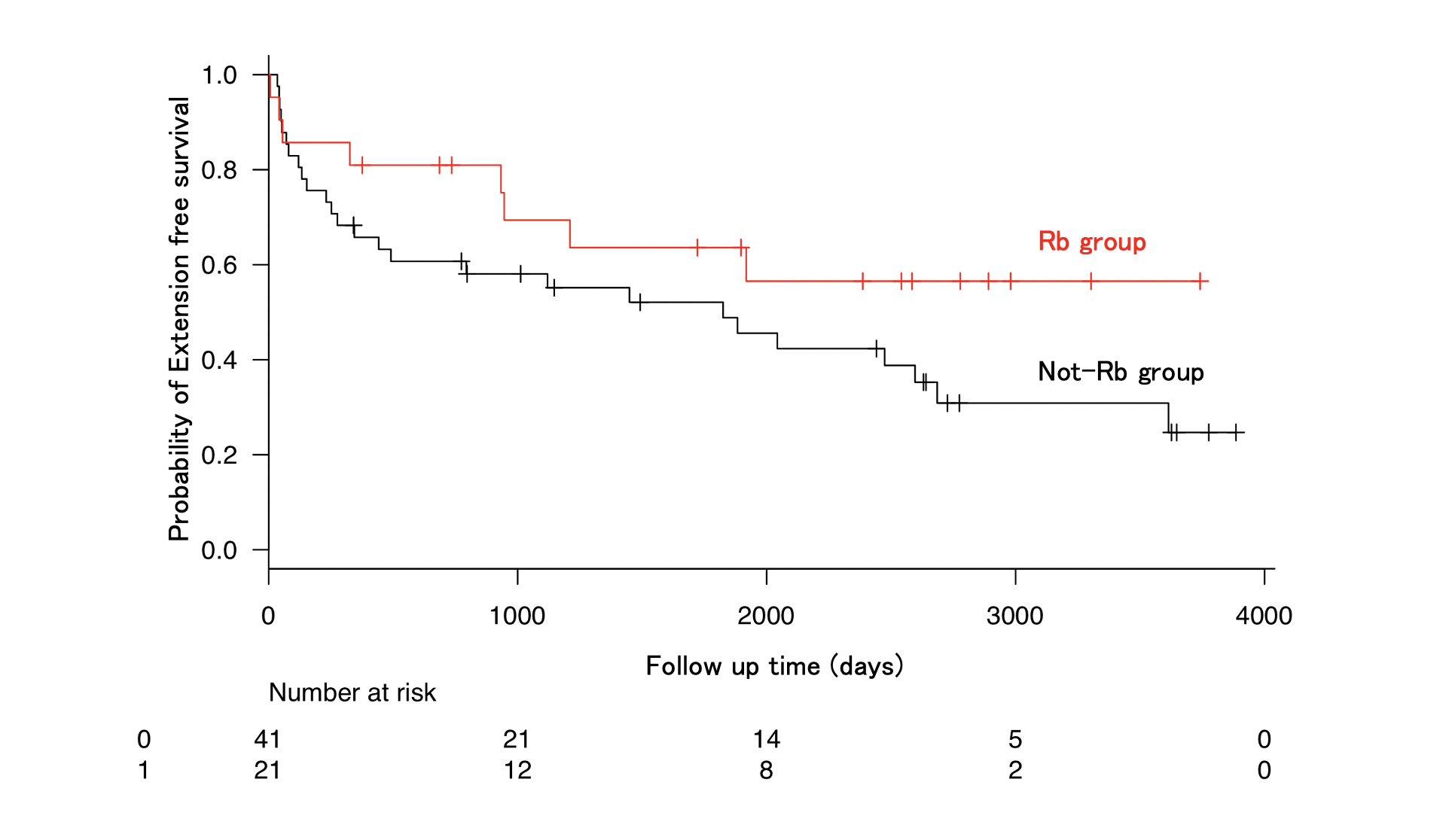 Patients with lower rectal UP is less likely to extent their disease location. There's no difference between the route of treatment and PE rate, but it's important to carefully check PE within first one year.