Anaemia negatively impacts physical fitness and quality-of-life, and therapy is aimed at normalization of haemoglobin (Hb) levels. In the majority of patients with inflammatory bowel disease (IBD) anaemia has a mixed aetiology resulting from chronic inflammation and iron deficiency. A considerable proportion of patients will fail to respond to iron therapy, but it has been difficult to identify non-responders at baseline with currently used iron indicators. Hepcidin is a peptide hormone involved in iron homeostasis. Upregulation leads to decreased iron availability, whereas downregulation facilitates iron absorption and release from macrophages to allow for erythropoiesis.
We evaluated commonly used iron indicators (ferritin and transferrin saturation [TSAT]) and emerging biomarkers (soluble transferrin receptor [sTfR] and hepcidin levels) at baseline to predict non-responsiveness to iron therapy in anaemic children with IBD.

We performed a prospective multi-centre cohort study among patients with IBD and anaemia (defined as Hb > 2 standard deviations (SD) below the reference mean according to WHO cut-offs). We assessed iron indicators, sTfR, and hepcidin at baseline and again one month after the initiation of oral or intravenous iron therapy. Therapy was given according to international guidelines. Primary outcome was based on the change of Hb z-score (one month after treatment vs baseline) divided by baseline SD, where non-responsiveness was defined as a standardised change score of less than 1. Hepcidin was expressed as z-score to allow correction for age and gender. Baseline data of ferritin and TSAT were used to construct a basic logistic regression model. Hepcidin and/or sTfR were then added to the basic prediction model (models [M] 1-3). Optimal sensitivity and specificity were identified using the Youden’s J Index. 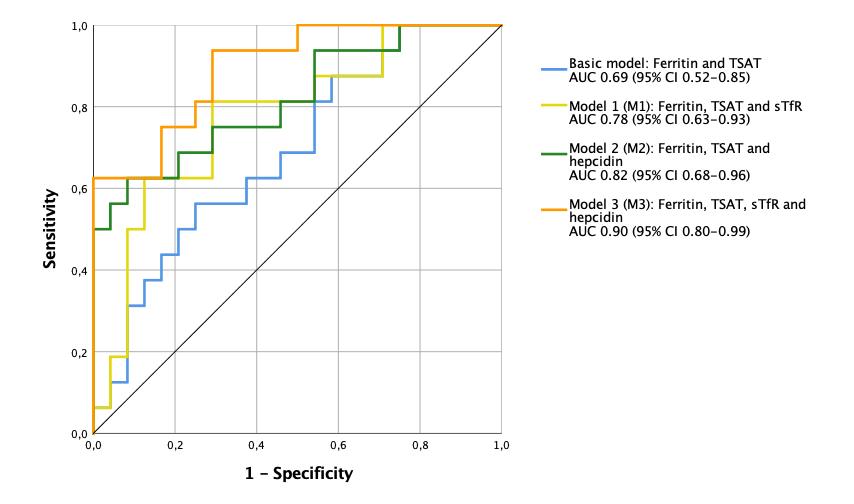 Based on prediction quality of the models, triaging with a strategy that involves baseline ferritin, TSAT, sTfR, and hepcidin is preferred to assess non-responsiveness to iron therapy in anaemic children with IBD.