The aim of this study was to determine the disease phenotype, evolution and therapeutic needs of de novo inflammatory bowel disease (IBD) in transplanted patients.

A retrospective single center study that included all patients who developed IBD after solid organ transplantation in a tertiary hospital. Data collected included transplant-related variables, IBD phenotype, course of the disease and its treatment. A control group of non-transplanted IBD patients was randomly selected.

The most common immunosuppression regimen was tacrolimus+mycophenolate mofetil (MMF)+prednisone and the most frequent change after diagnosis was the switch of MMF for azathioprine. De novo IBD patients required less biological therapy than the control group (11.8 vs 42.1% p 0.02) and none required surgical intervention compared to 35.1% in the control group (p 0.002).

Multivariate analysis carried out on the total population showed that active smoking, perianal disease and extraintestinal manifestations were associated with a greater need for biologics, while the only factor that influenced surgical risk was stricturing and penetrating behaviour of Crohn´s disease. 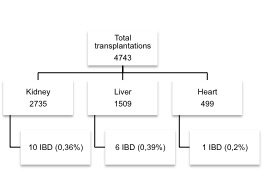 Figure 1. Total transplants performed in our hospital and patients who developed de novo IBD after transplantation. 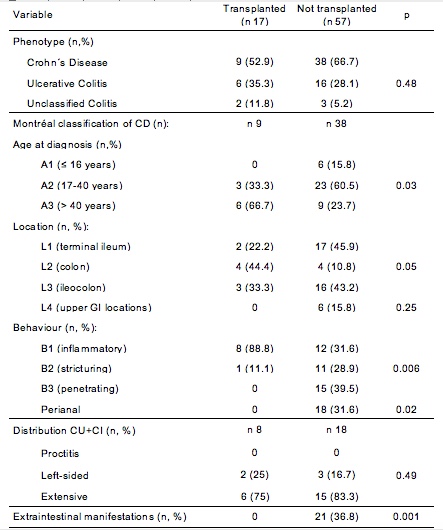 De novo IBD after solid organ transplantation has a favorable course, predominating the inflammatory behaviour and requiring less biological therapy and surgical interventions. The absence of extraintestinal manifestations and perianal disease stands out.