Previous studies have shown a lower level of parasympathetic activity in patients with inflammatory bowel disease (IBD) compared to healthy subjects. Heart rate variability (HRV) oscillations are used to detect autonomic instability and was found to be lower in adults with IBD compared to controls. Nevertheless, the data on the relation between the autonomic function and IBD outcome are scarce. The aim of the study was to evaluate HRV as a predictor to paediatric IBD outcome.

Children (<18 years of age) with IBD were prospectively recruited. For each patient, a 10-minute measurement of HRV was conducted by Pulse Oximeter (BM1000A/Shanghai Berry Electronic Tech Co., Ltd). The square root of the mean squared differences of successive RR intervals (RMSSD) was calculated. Clinical data, including demographic variables, disease activity and course, medications and laboratory results were collected during a follow-up of 12 months. The relation between RMSSD and clinical measures was evaluated.

Overall, 34 IBD children with an average age of 15.32±2.18 years were included: 21 (61.8%) children with Crohn's disease and 13 (38.2%) with ulcerative colitis. Children in clinical remission had a significantly higher RMSSD compared to patients with active disease (67.72±27.81 and 45.76±22.04, respectively, p=0.022). In addition, patients with normal serum C-reactive protein (<5 mg/L), patients with normal serum hemoglobin and patients with long duration of IBD (more than a year from diagnosis) had a significantly higher RMSSD (Figure 1). Children that experienced disease exacerbation during the follow-up had a significantly lower RMSSD compared to children that kept clinical remission (Figure 2). In a multivariate analysis, higher RMSSD was a significant and independent predictor of lower risk of IBD exacerbation [OR (odd ratio) = 0.941, 95% CI (confidence interval) 0.887-0.998, p=0.044)].

HRV may not only reflect IBD activity, but also serve as a predictor to disease exacerbation in paediatric IBD. 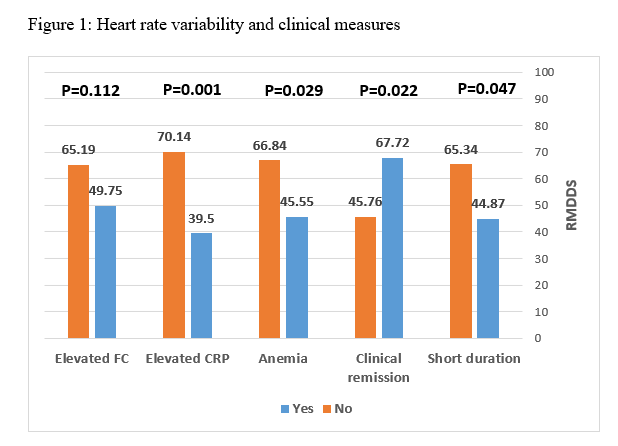 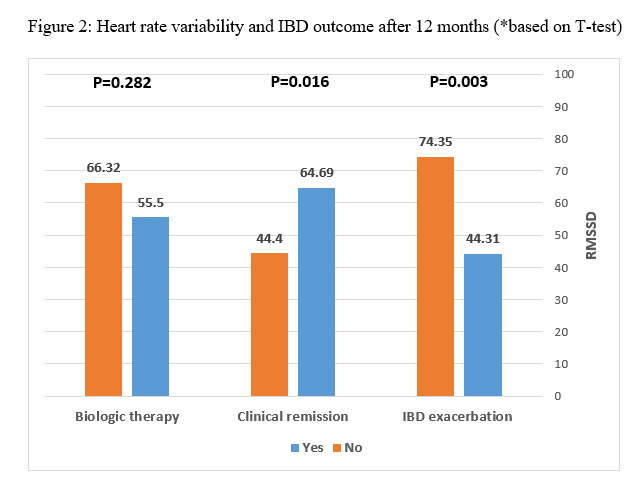