The α4β7 integrin monoclonal antibody vedolizumab (VDZ) has been shown to be efficacious for patients with moderate-to-severe Crohn’s disease (CD). This study aimed to analyse the added value of budesonide in combination with VDZ as an induction treatment for this indication.

A multicentre, retrospective chart review study was conducted in Belgium, Israel, and Switzerland. Adult patients with moderately to severely active CD (defined as an abdominal pain [AP] score of ≥2 and/or a mean daily loose stool frequency [LSF] score of ≥4 for the previous 7 days) who initiated induction therapy with either VDZ monotherapy (mono) or a combination therapy (combo) of VDZ with budesonide (index date) between 1 January 2015 and 31 January 2019 were included. Patients who received VDZ by IV infusion at weeks 0, 2, 6, 10 (only some patients received VDZ during week 10), and 8 weeks thereafter were assessed for time to patient-reported outcome (PRO) clinical remission (Kaplan-Meier curves), defined as an average daily composite score of AP ≤1 and LSF ≤31 within 14 weeks. Regression models were used to assess differences and associations.

Overall, 123 patients were included (mono, n=73; combo, n=50). Patients initiating combo presented with more severe disease at index date than patients initiating mono. PRO clinical remission rates were estimated at 71.4% (50/70) in the mono and 68.0% (34/50) in the combo groups, with a similar median time to PRO remission of 91 days (95% CI: 70–98) and 95 days (95% CI: 70–98), respectively (Figure 1). Figure 2 shows the mean % change in AP and LSF from baseline to week 14, which was comparable for mono and combo. The variables associated with mean % change were moderate and severe AP scores for AP and being a current smoker for LSF. One patient in each group discontinued VDZ before week 14 (due to lack of effectiveness [mono] and adverse event [AE; combo]); 68.0% of patients in the combo group discontinued budesonide by the end of the follow up period. The reasons for discontinuation were routine treatment regimen (8 weeks 9 mg/day+subsequent tapering‑off) in 85.3% of the patients, lack of effectiveness in 5.9% and AEs in 2.9% (5.8% other reasons). Safety event rates were similar among the groups for overall AEs (mono, 23.3%; combo, 26.0%), with the majority designated as mild to moderate in severity, and 83.3% resolved within the follow-up period.

Comparable effectiveness and safety outcomes were observed with mono and combo therapy in patients with CD; however, disease state among patients receiving combo was more refractory/severe at baseline. Further evidence is needed to corroborate these findings.
1Feagan et al. Clin Gastroenterol Hepatol. 2019;17(1):130-138. 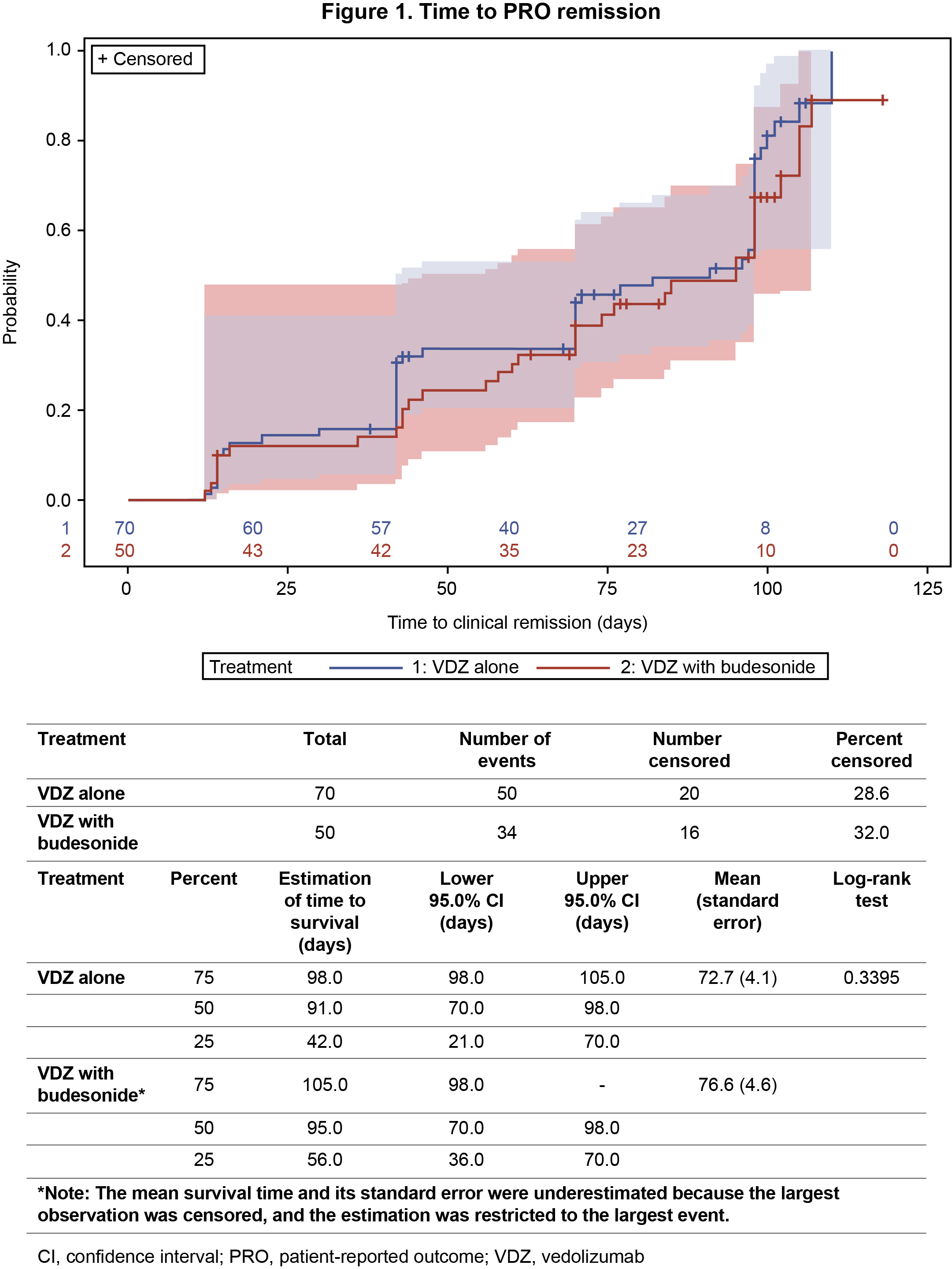 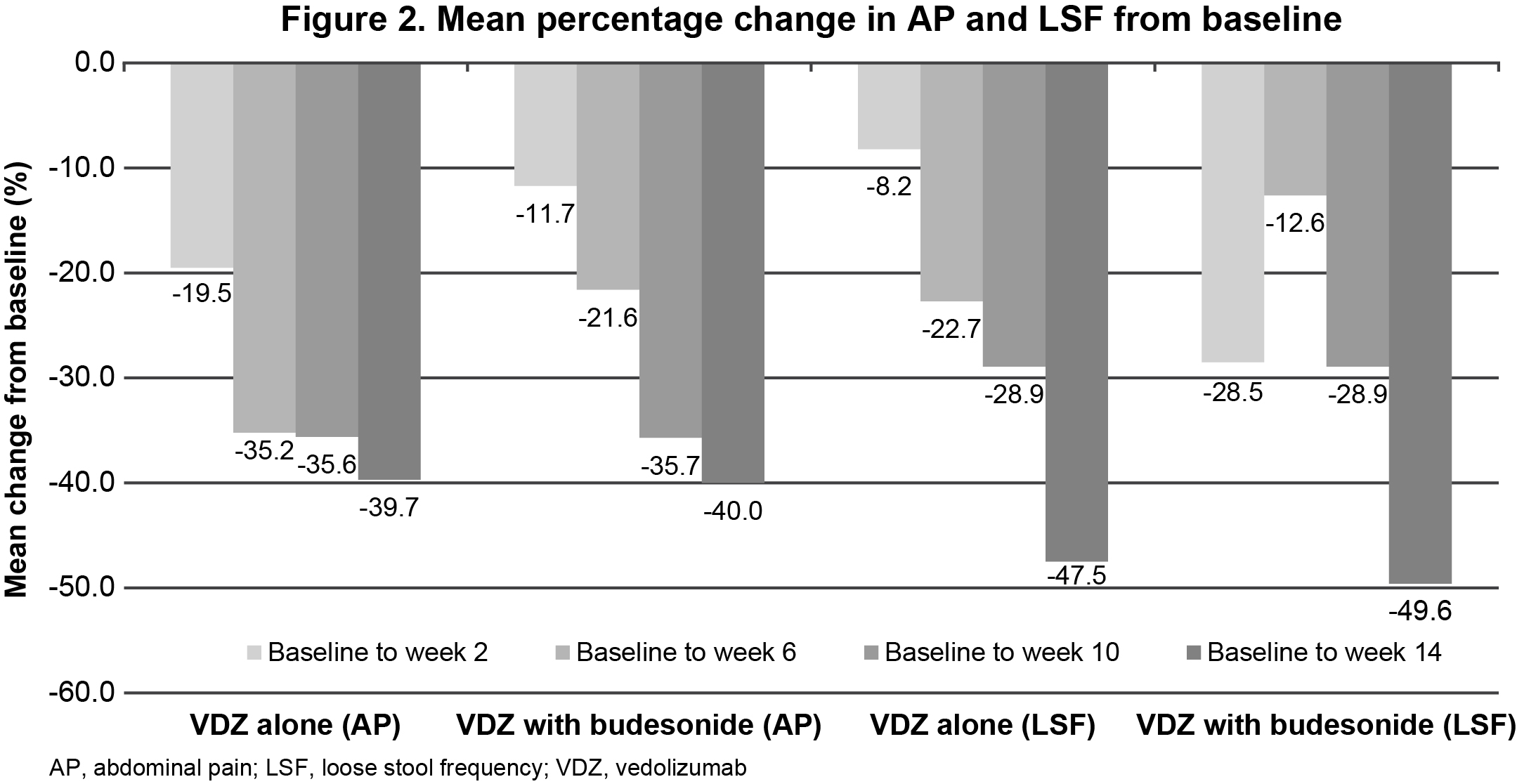