Pts with IBD treated with VDZ intravenous (IV) or subcutaneous (SC) in phase 3 trials who continued 5-ASA (at any dose) at the time of starting VDZ were compared with those who received no concomitant 5-ASA. Pts were also stratified by ulcerative colitis (UC) or Crohn’s disease (CD). Efficacy outcomes were the proportion of pts achieving clinical response, clinical remission and corticosteroid (CS)-free clinical remission at Wk 6 (end of induction phase) and Wk 52 (end of maintenance phase). Safety outcomes were the proportion of pts experiencing any infection and enteric infections. Studies included: GEMINI 1 and 2, and VISIBLE 1 and 2 in efficacy analyses; GEMINI 1, 2, 3 and long-term safety for VDZ IV, and VISIBLE 1, 2, and open-label extension (data cut-off 17 May 2019) for VDZ SC in safety analyses.

In this post-hoc analysis of VDZ pivotal trial data, concomitant 5-ASA does not appear to significantly impact the efficacy of VDZ in pts with IBD. No new safety signals were identified. The safety profile of VDZ IV and SC, with and without 5-ASA was consistent with the known safety profile of VDZ. Although there was limited data in some subgroups, there was no evidence to suggest that concomitant 5-ASA usage was associated with higher infection rates. These data will be useful to inform risk-benefit assessments of continued 5-ASA in VDZ-treated pts. 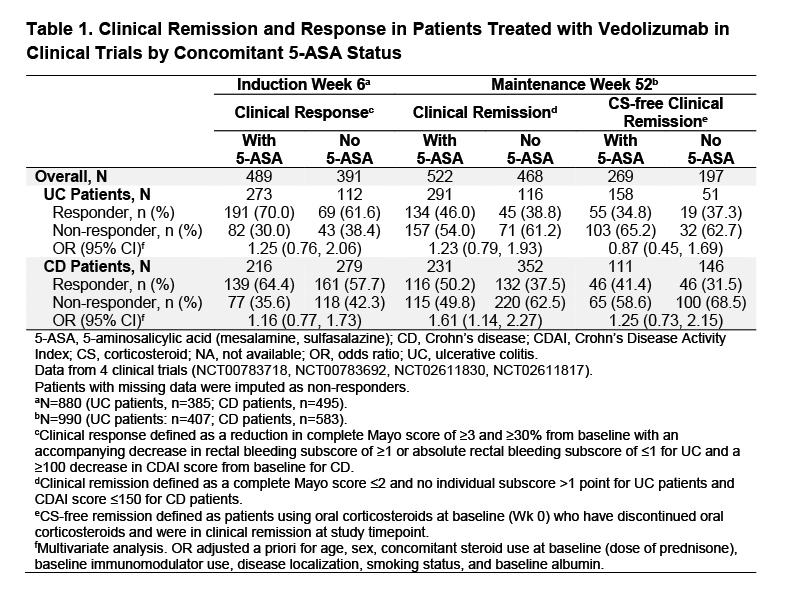 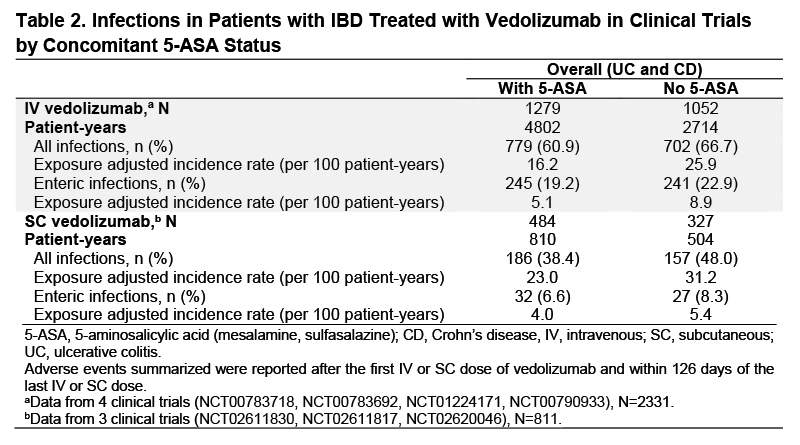