Intestinal fibrosis is a common complication of Crohn's disease (CD) leading to progressive bowel stricture formation. Mesenchymal stem cells (MSCs), known for their immunomodulatory, anti-inflammatory and anti-fibrotic properties, could be a potential therapy in this frequently fibro-inflammatory condition. In this phase I–II open-label pilot trial, we aimed to assess safety and efficacy of local MSCs injection in CD strictures.

CD patients with a non-passable stricture, length from 2 to 5 cm, accessible by ileocolonoscopy, but without intestinal obstruction, fistulas, or abscess, could be included. A total of 3X107 allogenic bone-marrow derived MSCs were equally injected in the 4 quadrants of the strictured bowel wall during an ileocolonoscopy. Adverse events and clinical scores (Crohn Disease Activity Index, Short Health Scale and Crohn Disease Obstructive Score) were evaluated at each follow-up visit (at week 4, 12, 24 and 48) while endoscopy was performed at baseline, W12 and W48. The main judgement criteria for efficacy was the complete (defined by the ability to pass the ileocolonoscope) or partial (defined by a diameter increase) resolution of the stricture at 12 weeks. Other efficacy criteria included complete or partial resolution of the stricture at 48 weeks as well as the evolution of clinical scores between weeks 0, 12 and 48.

Between 2018 and 2020, we performed 11 local MSCs injections in 10 CD patients (6 female; aged to 38-65 years; median 45 years old; 70% were smoker). The strictures’ (3 primary, 7 anastomotic) location was as follows: 7 at an ileo-colonic or ileo-rectal anastomosis, 1 colonic and 2 of the ileocecal valve. MSCs injections were well tolerated but a total of 5 hospitalizations for occlusion were reported (2 secondary to a different stricture than the injected one) leading to a surgical resection for one patient and an endoscopic dilatation for another one. Neither intestinal perforation nor intra-abdominal fistula or abscess was reported. At 12 weeks, 5 patients (45%) presented a stricture improvement with a complete resolution for 2 and a partial resolution for 3. Of the 11 MSCs injections, 6 patients were re-evaluated at week 48 (2 patients still undergoing follow-up, 1 operated, 1 dilated, and 1 lost to follow-up), 4 patients had a complete resolution and 1 had a partial resolution. The evolution of clinical scores between weeks 0, 12 and 48 (Figure 1) was not statistically significant. 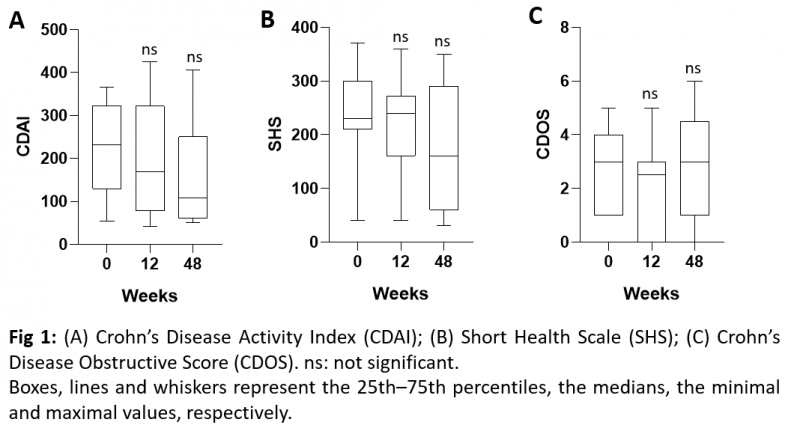 Local MSCs injection in non-passable CD stricture was well tolerated over the short term but several occlusions were reported in the follow-up. Combining the effects of MSCs with the proven effect of endoscopic balloon dilatation could possibly improve the outcome of CD stricture.