Tofacitinib is an oral, small molecule JAK inhibitor for the treatment of ulcerative colitis (UC). RIVETING (NCT03281304) is an ongoing, double-blind, randomised, parallel-group study designed to evaluate the efficacy and safety of dose reduction to tofacitinib 5 mg twice daily (BID) vs remaining on 10 mg BID in patients (pts) with UC in stable remission on tofacitinib 10 mg BID maintenance therapy. Eligible pts had received tofacitinib 10 mg BID for ≥2 consecutive years in an open-label, long-term extension study (NCT01470612), and had been in stable remission for ≥6 months (M) and corticosteroid-free for ≥4 weeks prior to enrolment.1 We aimed to evaluate the association between the duration of remission prior to enrolment into RIVETING and the efficacy of tofacitinib 5 and 10 mg BID.

Pts who were in partial Mayo score (PMS) remission (a PMS of ≤2 with no individual subscore >1, and a rectal bleeding subscore of 0) at RIVETING baseline were included in this analysis. Pts were randomised to dose-reduce to tofacitinib 5 mg BID or remain on 10 mg BID. We evaluated efficacy endpoints at Month 6 in RIVETING, stratified by duration of PMS remission (0–12, 12–24, 24–36, 36–48, >48 M) at RIVETING baseline. 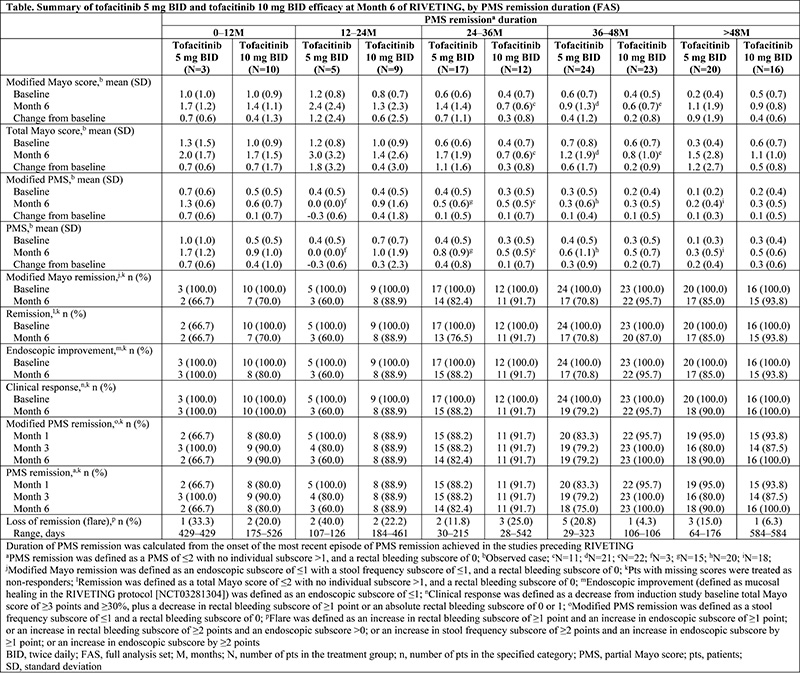