Patient registries are a source of real-world data (RWD) that are increasingly used to generate real-world evidence (RWE) for the safety and effectiveness of medical therapies. However, in registries, outcome data typically collected in clinical trials may be missing in some patients, creating a major challenge in evaluating RWD reliably. Clinical remission in pediatric Crohn’s disease (PCD), defined by the Short Pediatric Crohn’s disease Activity Index (sPCDAI) <10, is routinely collected in the ImproveCareNow (ICN) Registry, the world’s largest registry of pediatric patients with inflammatory bowel disease (IBD). A feasibility analysis of ICN as a RWD source to estimate the efficacy of therapies in PCD found about one-third of patients were missing at least 1 of the 6 components needed to calculate the sPCDAI scores at Week 52. We conducted a simulation study to evaluate the performance of the multiple imputation (MI) method in addressing the missing data issue.

The Starting and Complete Datasets included 1,458 and 1,212 patients, respectively. The true clinical remission rate in the Complete Dataset was 75.1% (95% CI: 72.6%-77.5%). Analysis without MI for the missing sPCDAI data resulted in underestimation of clinical remission rate, with bias about -2% to -5% (Table 1). The MI method eliminated the bias and had 100% coverage in all simulation scenarios by using a large number of independent predictors. 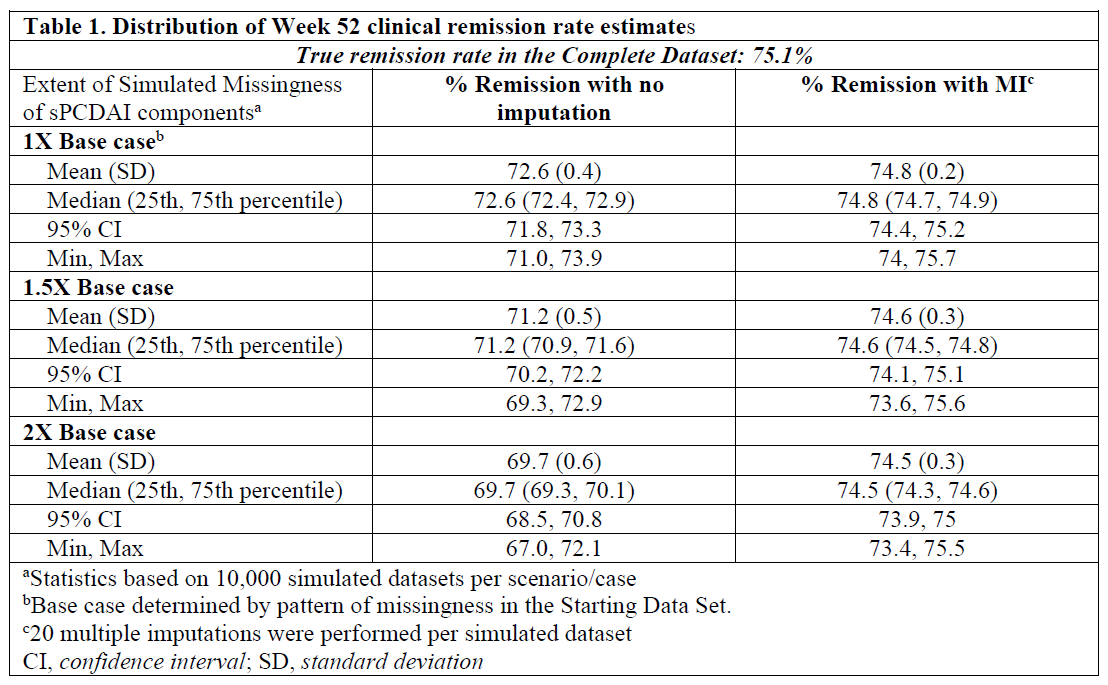 The MI method improved the validity, reliability, and efficiency of using RWD for estimating clinical remission in pediatric patients with CD and could be valuable in other registry studies.