Patients were randomized 2:1:1:2 across 4 treatment arms (PBO, 200, 600, 1000mg miri) administered intravenously (IV) every four weeks (Q4W) at Weeks 0, 4, and 8. Patients who received miri and achieved ≥1 point improvement from baseline (BL) at W12 in Simple Endoscopic Score for Crohn’s Disease (SES-CD) were re-randomized 1:1 into double-blind maintenance to continue their IV dose assignment Q4W (IV/IV) or to 300mg miri SC Q4W (IV/SC); maintenance IV arms were pooled for analysis. W12 non-improvers and all induction PBO patients received 1000mg miri Q4W from W12 through W52. Biopsies from terminal ileum and 4 colonic segments (ascending, transverse, descending, rectum) were obtained during endoscopy at W0, 12 and 52 and scored blind to treatment and response status. Ileum and colon scores were reported separately. Colon scores were derived from the sum of the 4 colonic segments, and total intestine scores from the 4 colonic segments plus ileum. Endpoints were defined post-hoc but prior to performing the analyses and only included patients with active histologic disease at BL (see Table). Histologic response was defined as: a) absence of neutrophils in lamina epithelialis, and absence of epithelial damage, erosions and ulceration or b) decrease of either RHI or GHAS ≥50% from BL. Histologic remission was defined as absence of mucosal neutrophils, epithelial damage, erosions, and ulceration. Deep histologic remission was defined as histologic remission combined with absence of chronic inflammatory cell infiltration of the lamina propria. For assessment of total intestine inflammation, the criteria for response, remission or deep remission must have been met in all 5 bowel segments.

Patients treated with miri achieved and sustained histologic response and remission over 52 weeks of treatment. Among patients with W52 histologic remission, all but 2 patients achieved deep remission. 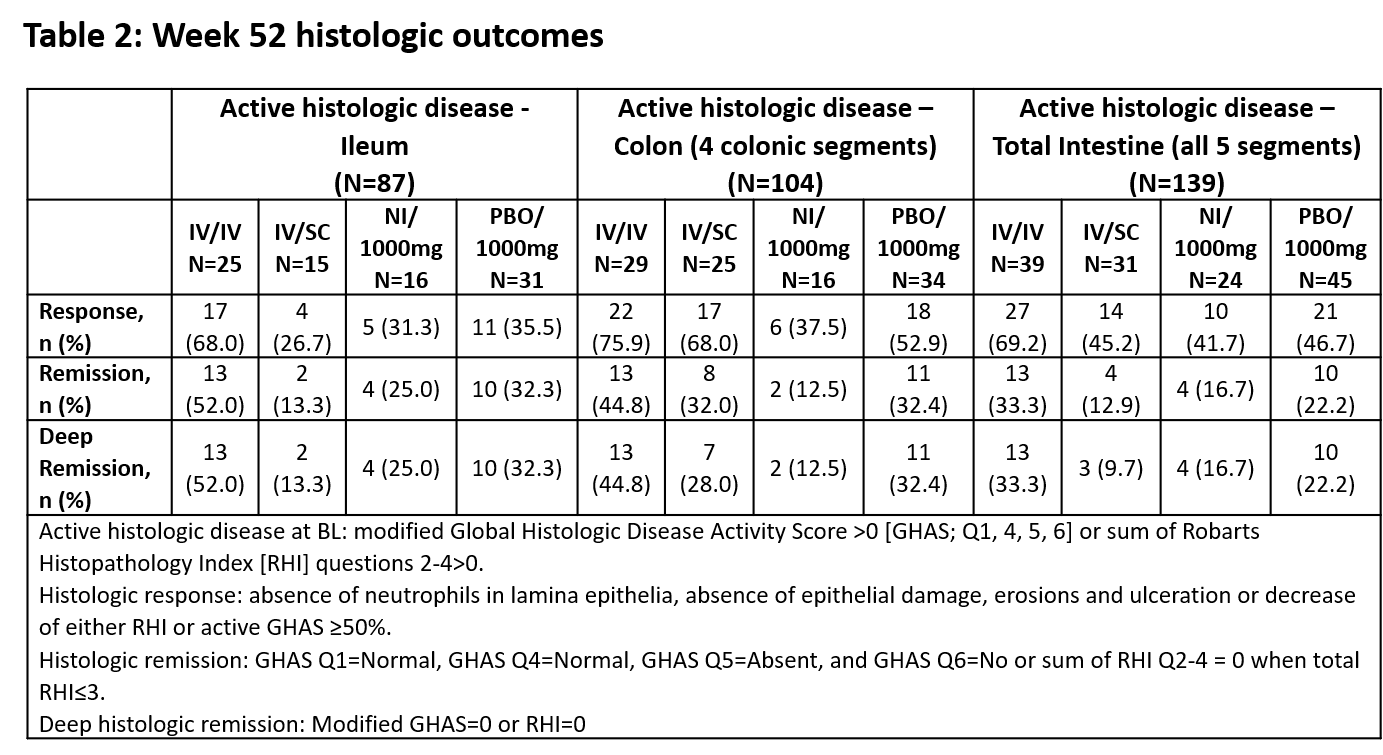