In children and teenagers with Inflammatory Bowel Disease (IBD) and iron deficiency anaemia, administration of iron is recommended to replete empty iron stores, but the most effective route of administration remains unknown. We compared intravenous (IV) and oral iron therapy and evaluated physical fitness and haemoglobin (Hb) improvement over time.

We performed an international multicentre randomized controlled trial (NTR: 4487) in patients aged 8-18 years with IBD and anaemia (defined as Hb > 2 standard deviations (SD) below the reference mean according to WHO cut-offs). Children with severely active disease (PUCAI ≥ 65 or PCDAI ≥ 30) at baseline were excluded. Patients were randomly assigned to receive either IV iron via a single infusion of ferric carboxymaltose (15 mg/kg, maximum 750 mg) or oral iron using ferrous fumarate 9 mg/kg/day in 2 doses (maximum 600 mg) for 12 weeks. The primary outcome was improvement of physical fitness, defined as an increase in 6-minute walking distance (6MWD) over time and expressed as z-score to allow correction for age and gender. Secondary outcome was an increase in Hb z-score. Linear mixed models were used to analyse effect of treatment on 6MWD and Hb z-score at each follow-up visit controlling for disease activity, IBD diagnosis, study centre and outcome at baseline.

We randomised 64 patients (33 IV iron; 31 oral iron). One month after the start of iron therapy, increase of 6MWD z-scores was significantly larger in the IV group compared to the oral group (0.75 SD vs. -0.16 SD, P=0.006, Figure 1). At 3- and 6-months follow-up, no significant differences in 6MWD z-scores were observed between groups. Hb z-scores gradually increased over time in both groups, but there was no significant difference in change from baseline between groups at 1, 3 and 6 months after initiation of iron therapy (overall P=0.97, Figure 2). 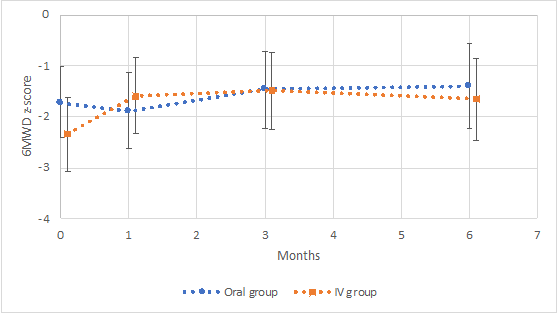 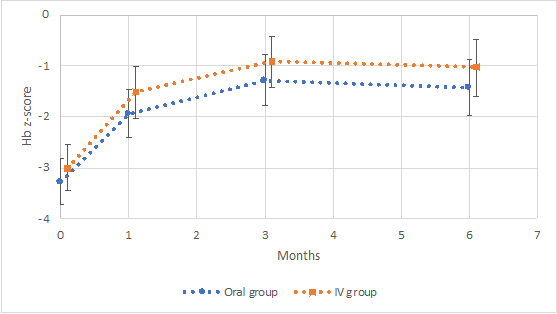 In this head-to-head randomized controlled trial involving paediatric patients with IBD and anaemia, IV iron was superior to oral iron with respect to early improvement of physical fitness. However, this effect subsided over time and improvement of Hb was similar for both types of iron therapy.