Tofacitinib is an oral, small molecule JAK inhibitor for the treatment of ulcerative colitis (UC). RIVETING (NCT03281304) is an ongoing, double-blind, randomised, parallel-group study designed to evaluate the efficacy and safety of dose reduction to tofacitinib 5 mg twice daily (BID) vs remaining on 10 mg BID in patients (pts) with UC in stable remission on tofacitinib 10 mg BID maintenance therapy. Eligible pts had received tofacitinib 10 mg BID for ≥2 consecutive years in an open-label, long-term extension study (NCT01470612), and had been in stable remission for ≥6 months and corticosteroid-free for ≥4 weeks prior to enrolment.1 We aimed to determine if faecal calprotectin (FCP), C-reactive protein (CRP) or partial Mayo score (PMS) can be used as predictors of maintaining remission after dose reduction.

A numerically higher proportion of pts with a SF subscore, RB subscore or modified PMS of 0 at Month 1 or Month 3 achieved efficacy endpoints at Month 6 compared with pts with respective subscores >0 (Table 2). 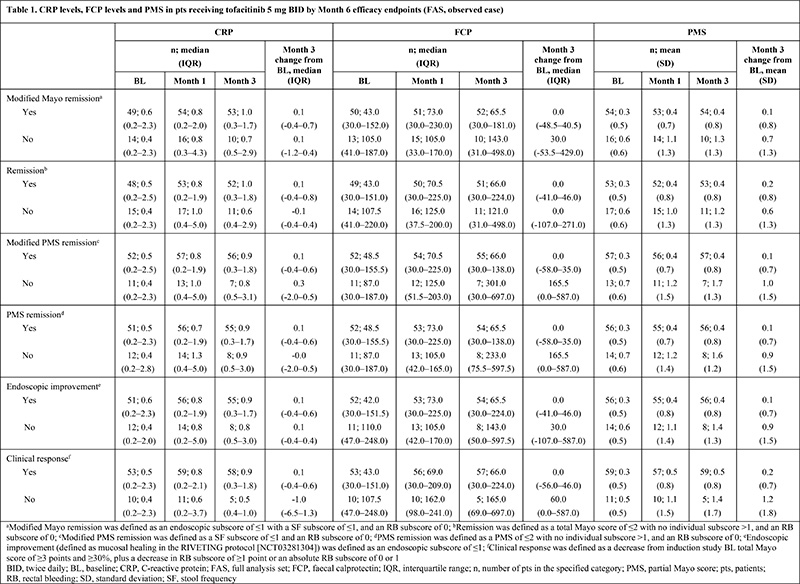 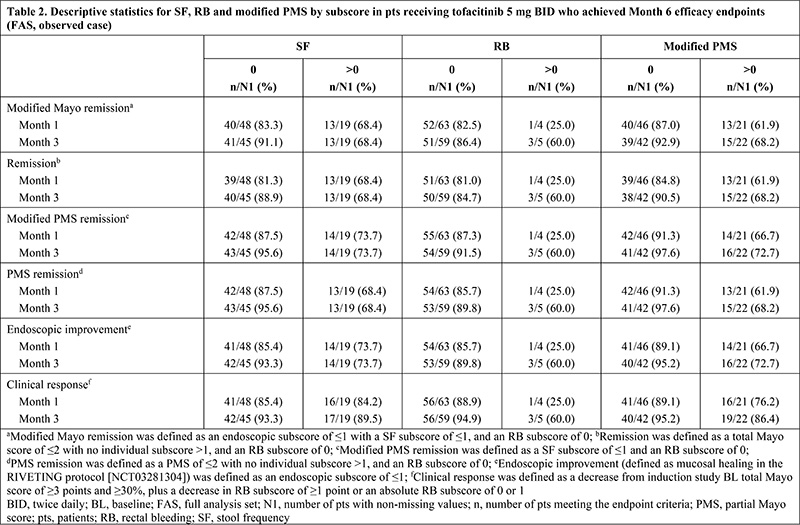 These analyses suggest that in pts previously in stable remission, an increase in FCP levels at Month 3, or PMS as early as Month 1, may help predict loss of efficacy after dose-reduction from tofacitinib 10 mg BID to 5 mg BID. A SF subscore, RB subscore or modified PMS of 0 at either Month 1 or Month 3 could indicate the likelihood of maintaining efficacy with tofacitinib 5 mg BID at Month 6. These analyses are post hoc, exploratory and limited by the small sample size.