The purpose of surgery for patients with ulcerative colitis (UC) is to save their lives and improve their quality of life (QOL). However, deciding whether to undergo surgical intestinal resection is among the most difficult decision that patients with UC may be required to make during the disease course. Although clinical outcomes and changes in QOL after total colectomy have been reported, few studies have investigated the psychological acceptability or subjective feelings among patients after surgery. This study aimed to evaluate the psychological acceptability of surgery among patients with UC who underwent total colectomy.

A cross-sectional single questionnaire survey for patients with UC who underwent colectomy was conducted from October 2019 to February 2020 at five Japanese IBD centres in Japan. According to the opinions of seven physicians specialising in IBD and a clinical psychologist, we created a questionnaire using a 10-point visual analog scale (VAS) consisting of 20 questions related to surgical acceptance and concerns related to UC. We asked patients to answer the questionnaire by recollection of the pre- and postoperative periods. The VAS scores before surgery were described by the patients looking back on their recollections. Pre- and post-surgical VAS scores were compared using Wilcoxon’s rank sum test. Cases under 6 years old at colectomy and patients followed for more than 10 years after surgery were excluded.

There were 71 cases, and the median age at surgery was 31.0 [range 9–75] years. The median time since surgery was 4.0 [range 0–10] years, and the valid response rate was 93 percent. Compared with pre-operatively, psychological acceptability of surgery significantly improved significantly after total colectomy (p < .001). The median scores for psychological acceptability of surgery were 5.1 (0–10) and 8.6 (0.3–10) before and after surgery, respectively. Scores improved in more than 90% of the patients. Subscores for a sense of loss of the colon, shame related to excretion, and dietary satisfaction improved significantly after surgery (p < .0001). 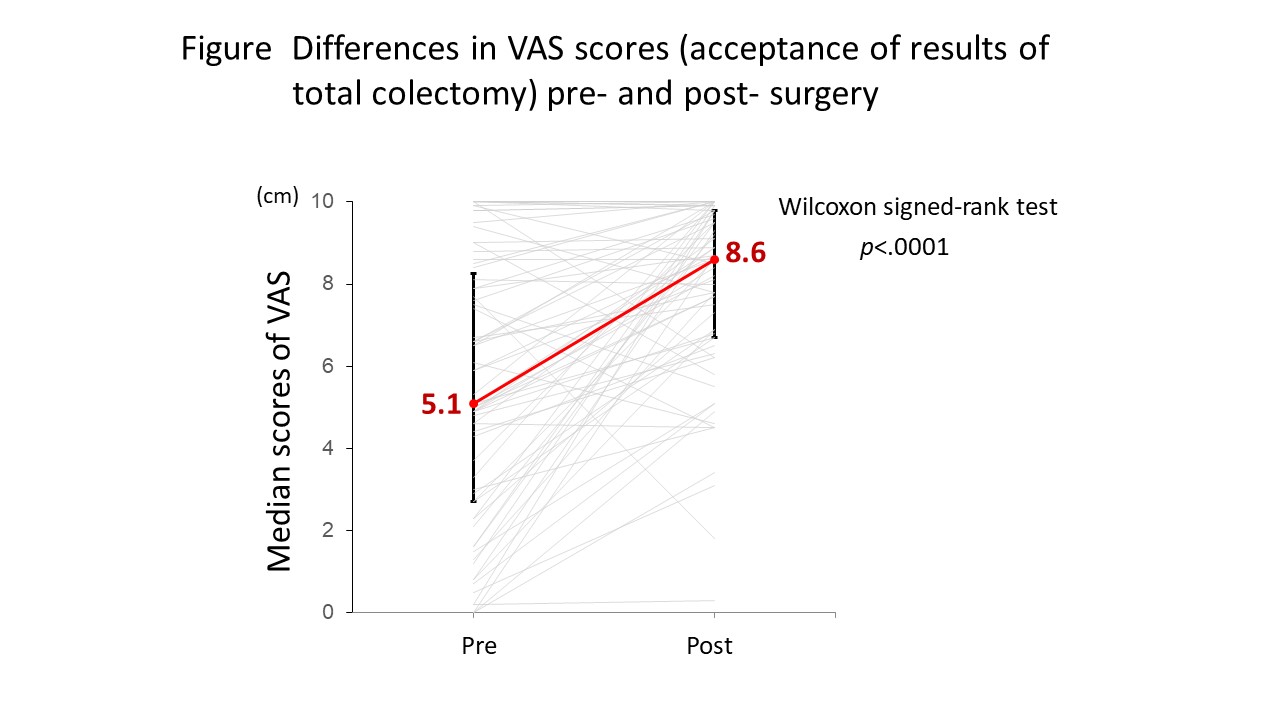 We examined for the first time the psychological acceptance of surgery among patients with UC who underwent total colectomy. We found that many of the emotional, physical, and social questions associated with UC improved after surgery.