The aim of the study was to assess the perception of inflammatory bowel disease (IBD) among Chinese patients and physicians.

Data in this cross-sectional study was collected from 6/2020 to 8/2020, which covered 24 provinces/cities in China and based on two surveys that was designed for collecting information from patients with Crohn’s disease (CD)/ulcerative colitis (UC) and the physicians.

Surveys were completed by 1058 patients (601 CD and 457 UC patients) and 351 physicians (181 treating CD and 170 treating UC). For the control of disease symptoms over the past 12 months, physicians believed that 65.19% and 57.65% of CD and UC patients, respectively, were managed without affecting their quality of life. Meanwhile, 56.07% and 49.46% of CD and UC patients, respectively, reported that disease control did not affect their quality of life. Physicians estimated that 87.85% of CD and 88.24% of UC patients were satisfied with treatment results. And 86.36% of CD and 79.43% of UC patients were satisfied with the current medications. Physicians prescribed biologics for 69.52% of IBD patients, and 48.3% of IBD patients actually used them. Repeated medication (30.95%), diarrhea (27.95%) and abdominal pain (25.29%) were most frequently ranked as most bothersome symptoms by CD patients. For physicians, abdominal pain (42.54%) was the most bothersome symptoms, followed by repeated medication (23.76%) and diarrhea (17.13%). Regarding UC symptoms, 51.18% of physicians believed that bloody stool was the most bothersome symptom for patients, and 41.58% of patients held this view. The sense of urgency was concerned as one bothersome symptom by 19.69% patients, while only 4.12% of physicians held the same views (Fig 1). Regarding the efficacy evaluation, in view of the CD physicians, 42.5% of CD patients were believed achieving completely or mostly controlled, while from the patients' perception, only 32.6% of CD patients agreed. Similarly, the proportion of UC patients who was believed by physicians that achieving completely or mostly controlled (40.0%) was also higher than that of UC patients who believed by themselves (Fig 2). 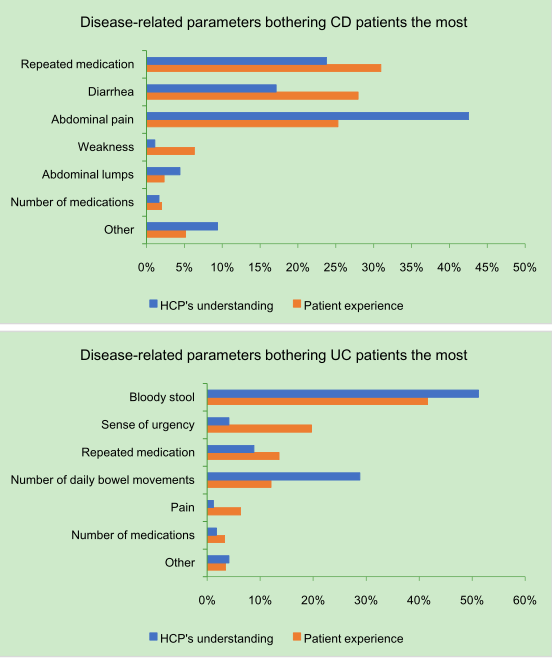 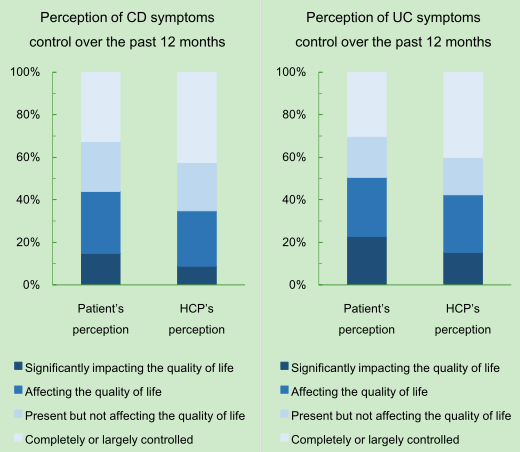