P480 Assessing primary response to biologic therapy in Inflammatory Bowel Disease - ‘the when and the how?’

ECCO guidelines state that patients started on biologic therapy for Inflammatory Bowel Disease (IBD) should be reviewed between week 10 and 16 depending on the biologic used and response assessed using predefined objective criteria. The study aim was to ascertain, the time point, and by which methods patients with IBD are being assessed for primary response.

A retrospective chart review was conducted of 50 consecutive patients with IBD who had been started on biological therapy between October 2018 and June 2019 at a tertiary referral university teaching hospital in London, UK.

On average, patients were assessed at week 13 for primary response. Figure 1 outlines the time to assessment of disease response, according to the biologic used. The most frequently used methods were clinical symptoms (49 patients, 98%) and blood tests (47 patients, 94%). Disease activity scores were rarely documented. Other methods of disease assessment were faecal calprotectin (13 patients, 26%), ileocolonoscopy (11 patients, 22%) and radiological studies (2 patients, 4%). Only 19 patients (38%) had either a faecal calprotectin or a colonoscopy ordered at their appointment. Thirteen patients (26%) had undergone an endoscopic assessment of their disease when the data was analysed in December 2019. 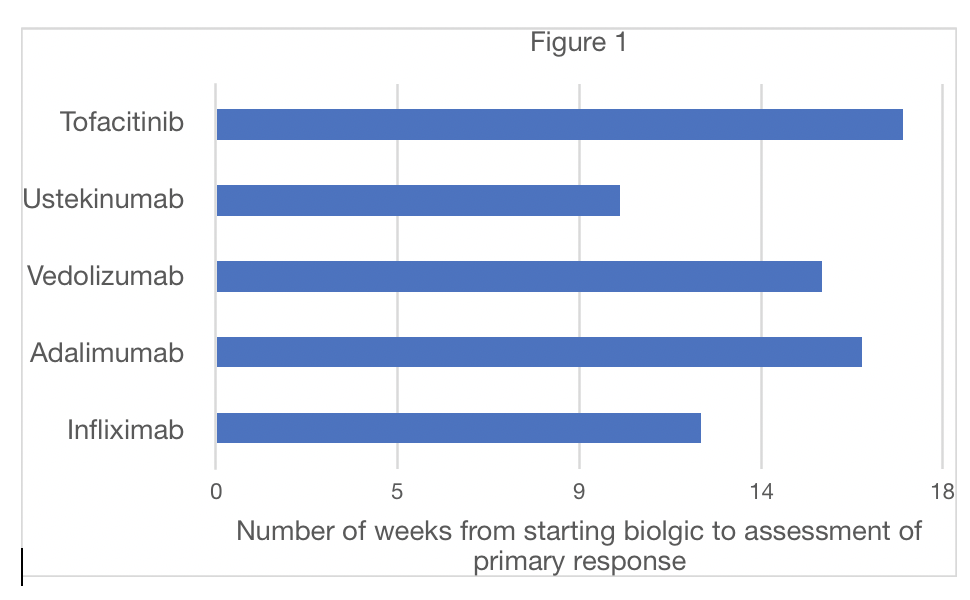 Patients are being assessed in a timely fashion for primary response to biological therapy, in line with current ECCO guidelines.  Clinical symptoms and blood tests are being heavily relied on to assess for primary response to therapy. Patient-reported symptoms do not correlate well with mucosal inflammation in IBD1. Faecal Calprotectin, as a surrogate marker of mucosal inflammation, and colonoscopy are being underused.  Potential reasons for the low rates of colonoscopy may include patient’s wishes and lack of endoscopy capacity.  The importance of a mucosal healing assessment is imperative to be able to optimise treatment appropriately and improve long-term outcomes for our patients.