Inflammatory Bowel Disease (IBD) is a chronic inflammatory disease of the gastrointestinal tract. Recently, physical activity has been suggested to improve the quality of life and course of disease in adult IBD patients. The aim of this study was to investigate physical functioning in paediatric IBD patients and to determine the effects of a tailored 12-week lifestyle intervention including a physical training program.

Figure 1 shows our study design and measurements. The tailored 12-week lifestyle intervention consisted of 3 strenuous physical training sessions a week and dietary advice. Effects on exercise capacity, endurance, physical activity levels, disease activity, quality of life, and fatigue were measured in paediatric IBD patients. Mild disease activity was defined as a PCDAI between 10 - 27.5 or PUCAI between 10 - 34. 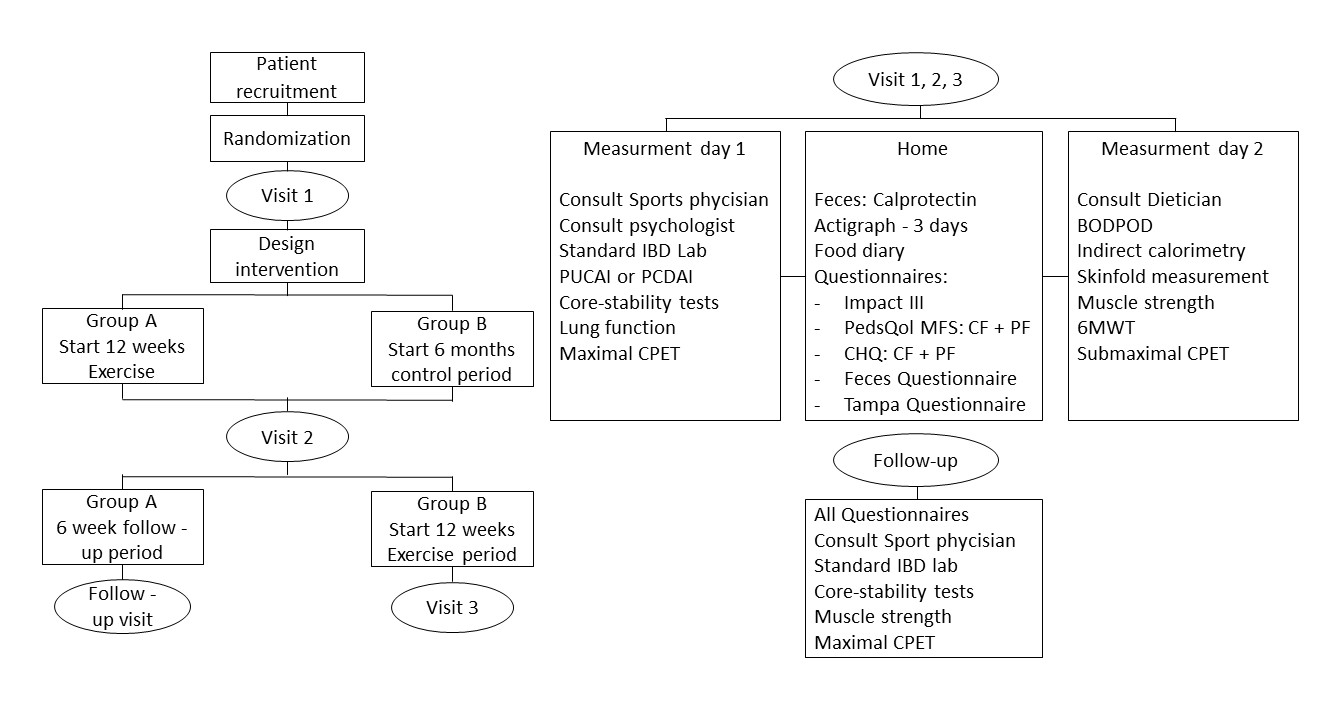 Sixteen paediatric IBD patients (median age 15 [9 - 17]) were included, 13 patients successfully completed the training program, 2 patients are still participating. At baseline, most patients had mild disease activity (n=9). Patients had reduced exercise capacity (76.8%±17.7% of predicted PeakVO2 , and reduced physical activity levels as shown by 80.3%±7.4% of measured time being spent in sedentary activity. PCDAI/PUCAI scores decreased significantly over the intervention period (13.8±11.7 vs. 3.65±4.5, P=0.002). Fecal calprotectin also decreased significantly (400 [18-3089] vs. 128 [20-2704], P=0.041). All patients but one had no changes in medical regimens before or during the lifestyle intervention that could have influenced disease activity. After the 12-week lifestyle intervention period, 9 out of 13 patients were in clinical remission. Maximum walked distance increased significantly (503±69 vs. 540±77 meters, P=0.001), although PeakVO2 and percentage of time spent in moderate-to-vigorous activity did not. Patients improved on overall quality of life measured by the Impact III questionnaire (+2.4 points, p=0.017). The Child Health Questionnaire showed a significant improvement on the child-reported physical functioning scale and on 5 parent-reported scales of quality of life. Child-reported fatigue measured by the PedsQol MFS did not improve significantly, parents-reported fatigue did. No changes were found on mentioned outcomes during the control period. After baseline measurements, the COVID-19 lock-down period started, possibly affecting normal daytime activities of the patients during the lifestyle intervention period.

A 12-week tailored physical training program including dietry advice is safe and beneficial for paediatric IBD patients and may contribute to better control of inflammation.