iBaSS is a phase IV single-centre, prospective, randomised, single-blind, cross-over study in adults with Crohn’s disease. 112 participants have been recruited from patients attending the IBD clinic for routine treatment. Eligibility criteria included mHBI < 8, stable on Humira™ or Imraldi™ with no expectation to discontinue or adjust adalimumab (ADA) dosing in the study period. The pragmatic study design mimics the optimal care pathway of patients transitioning between originator and biosimilar ADA, allowing all participants to experience both. Such transitions are part of routine clinical practice but with little understanding of the patient perspective. As part of iBaSS we capture the patient perspective and experience of transition, with the aim of informing future practice. 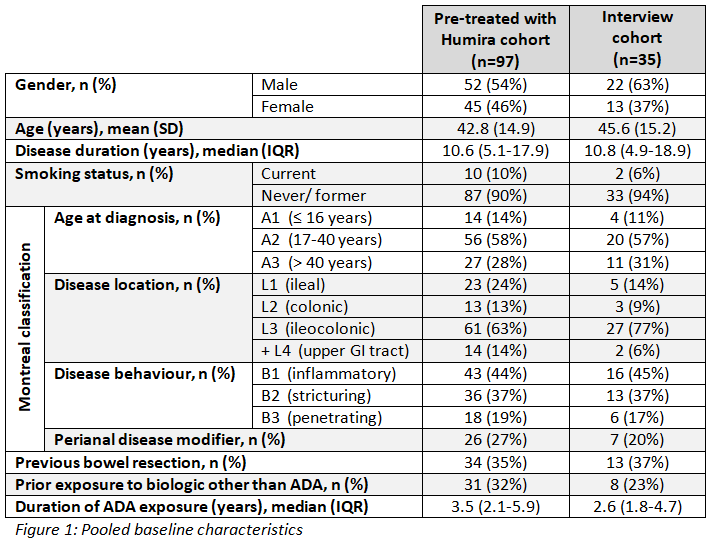 Purposive sampling was used to capture a wide range of perspectives from a subset of the participants treated with the originator ADA at enrolment. Interviews were semi-structured, using open-ended questions, facilitated by a topic guide developed with reference to published literature. Interviews were recorded, transcribed and analysed using thematic analysis. Thirty five participants were interviewed.

Opinions expressed were often heterogeneous, but commonly-occurring experiences were also identified. Prior awareness of biosimilars and knowledge of the biosimilar concept was low indicating a disparity between healthcare professionals and patients. Patients accept a biosimilar transition to minimise drug expenditure. Prior to undertaking biosimilar transition away from the brand they had experienced, efficacy and adverse effects were common concerns for patients. Trust in the healthcare team is critical to patient acceptance of biosimilars and important reassurances include a point of contact, education about biosimilars and specific monitoring. When reflecting on the experience, participants noted little subjective difference in efficacy or tolerability (although 22 participants specifically mentioned injection pain) following brand transition and the majority feel comfortable with future transition to another ADA biosimilar. Injection experience is important in patient satisfaction.

While biosimilars have driven a reduction in drug acquisition costs, the majority of patients have little knowledge and some concerns about transitioning to a biosimilar but accept the principles and can be reassured. The wide-ranging views elucidated suggest that a tailored, patient-centred approach is key to successful implementation.