The Ulcerative Colitis (UC) Narrative is a global initiative examining perspectives on multiple aspects of UC via 2 related surveys (1 patient [pt]-based and 1 healthcare professional [HCP]-based), with the aim of improving understanding of the impact of UC and identifying gaps in optimal care. We present survey responses from pts and HCPs in Japan, a subanalysis of the global UC Narrative.

Surveys were conducted by The Harris Poll between Nov 2017 and Jan 2018. Pts (≥18 years of age) met the following criteria: had a diagnosis of UC (confirmed by endoscopy), had not had a colectomy, had taken prescription UC medication beyond 5‑aminosalicylates, and had visited a gastroenterologist/internist in the previous year. HCPs were required to see ≥5 pts with UC per month, and ≥10% of their current pts had to be taking a biologic for their UC. Self‑reported treatment history was used as a proxy for disease severity, and >80% of pt respondents were required to have moderate to severe UC.

210 pts and 151 HCPs in Japan responded. The mean age of pts with UC was 44.3 (standard deviation 11.6; median 44) years, and 73% were male. Most (85%) pts were satisfied with their communication with their HCP. HCPs slightly underestimated pt satisfaction, believing that, on average, 71% of their pts were satisfied. However, most pts (65%) and HCPs (82%) wished for more discussion about goals for managing or treating UC. Most (83%) pts said they were honest with their HCP when discussing their experiences with UC, although almost half (45%) said they regretted not telling their HCP more; most (75%) HCPs felt that their pts were being honest with them. Over half (55%) of pts said they were hesitant to tell their HCP if they did not take their medication exactly as prescribed; however, most (79%) HCPs believed that >50% of their pts adhered to treatment. HCPs underestimated the importance of toileting accidents to pts (28% vs 54%), and overestimated the importance of mucosal healing (59% vs 29%) (Figure 1). Some pts had misconceptions about treatment: only 69% knew that it was not OK to stop taking UC medications once they felt better, only 76% knew that it was not OK to keep using steroids as a long-term maintenance medication, and only 60% knew that it was possible for their body to stop responding to biologics (Figure 2). Most (71%) HCPs believed that pt advocacy organisations are important, but only recommended them to 26% of pts; only 38% of pts had interacted with one. 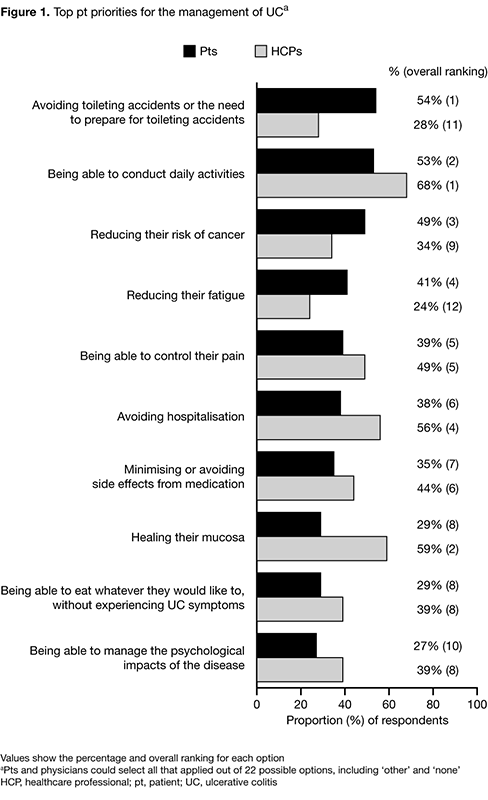 There was a high level of concordance in responses between pts in Japan and their HCPs; however, this survey revealed several gaps between pt and HCP perspectives. Consequently, the importance of pt-HCP communication in treat-to-target strategies remains.