P654 Prevalence of Inflammatory Bowel Disease in young Greek Army male recruits from 2006 to 2018: a thirteen-year retrospective study from a tertiary center

Prevalence and incidence of Inflammatory Bowel Diseases (IBD), vary among different countries. Data regarding prevalence of IBD in Greece are limited or outdated.

We studied retrospectively, using the official Hospital electronic-form database, medical records of IBD patients from a population of 551,808 Greek Army candidates for recruitment in a thirteen-year period from 2006 to 2018. Study population consisted of males aged 18 to 37 from Northwest, Central Greece (including Athens) and South Aegean Islands. Age, disease distribution, surgery and pharmaceutical treatment at the time of patients’ admission were recorded.

Prevalence of IBD among male recruits during the studied period was 0.15% (n=839 patients), (95% confidence interval = 0.14% to 0.16%). Out of them, 448 (53.4%) had Crohn’s Disease (CD) and 391 (46.6%) Ulcerative Colitis (UC). Figures 1 & 2 illustrate the percentages of pharmaceutical treatment for CD and UC respectively, while figures 3 & 4 their distribution and fluctuation during the studied period for CD and UC respectively . Concerning CD cases, monotherapy with biologics was the most commonly used pharmaceutical choice (32.1%) with Infliximab being the predominant one (60% of them), though azathioprine had been used more often than any other isolated drug agent (27%). Interestingly, 21% of CD patients received 5-ASA as monotherapy, mainly in cases of mild CD colitis or terminal ileitis. Among UC patients, mesalamine was the most often prescribed treatment (64.2%), while biological drugs and combination therapy were not so widely administered as in CD (ratio 1:2). During the recorded period for CD patients we noticed that: i) there was a reducing trend in azathioprine prescription, ii) adalimumab presented to be an increasing predilection iii) infliximab’s use was maintained at the same level all these years. Among UC cases, mesalamine was constantly the first choice, while adalimumab was not so widely administered as in CD. A distinct reduction in steroid use was noted from 2006 to 2018, coming alongside with biologics establishment. Additionally, 8% of CD and 2.8% of UC patients had undergone a surgery due to disease complications. This low proportion could be explained by the relatively young age of the study population. 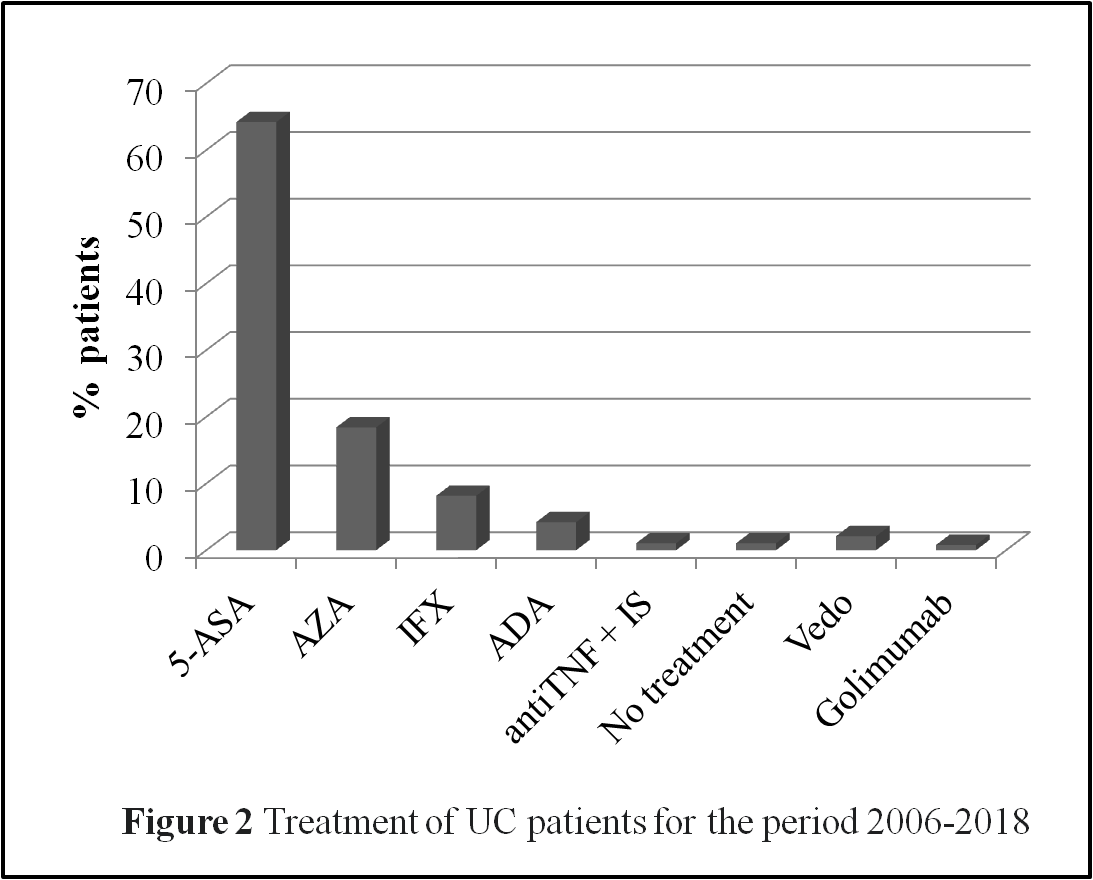 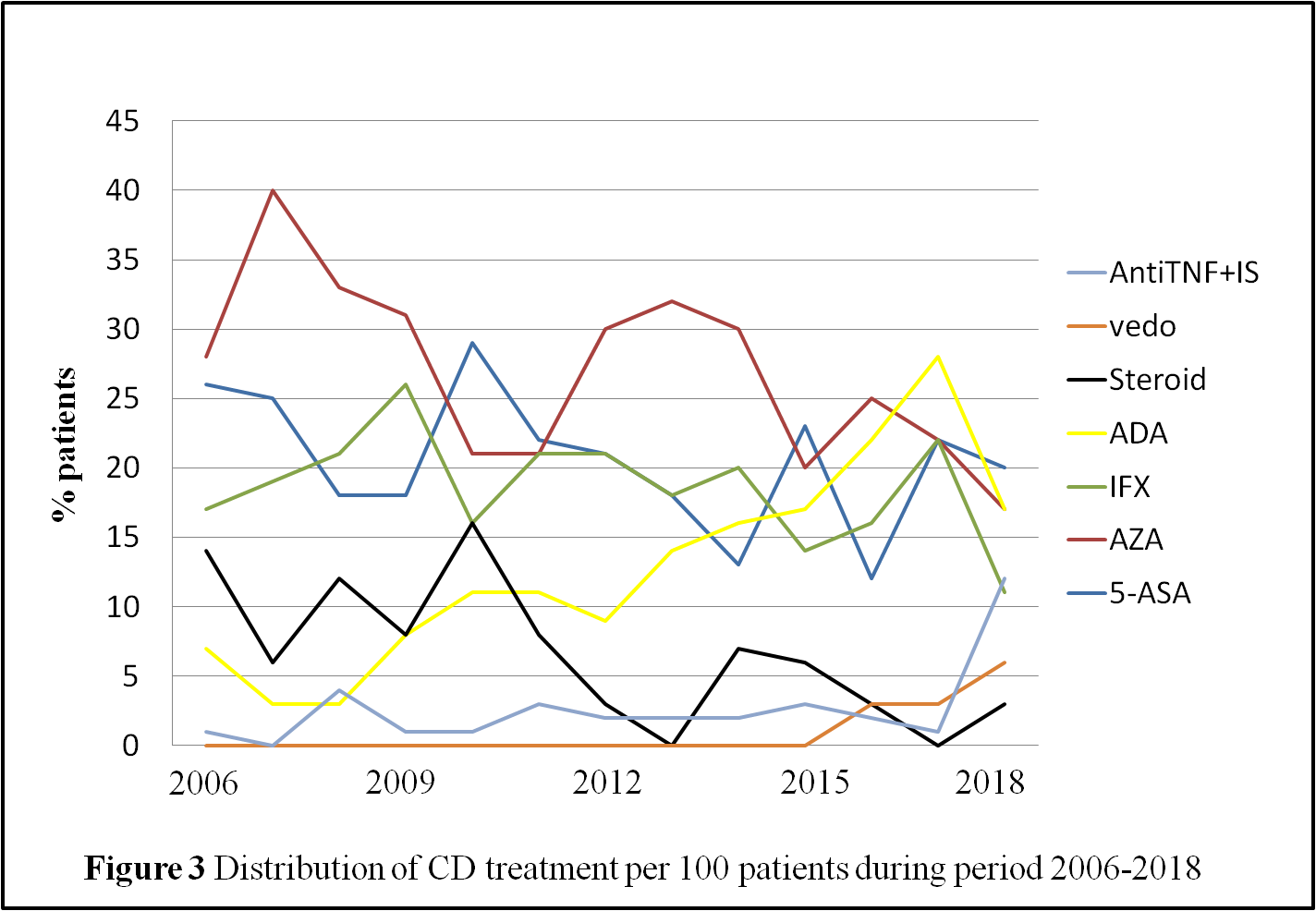 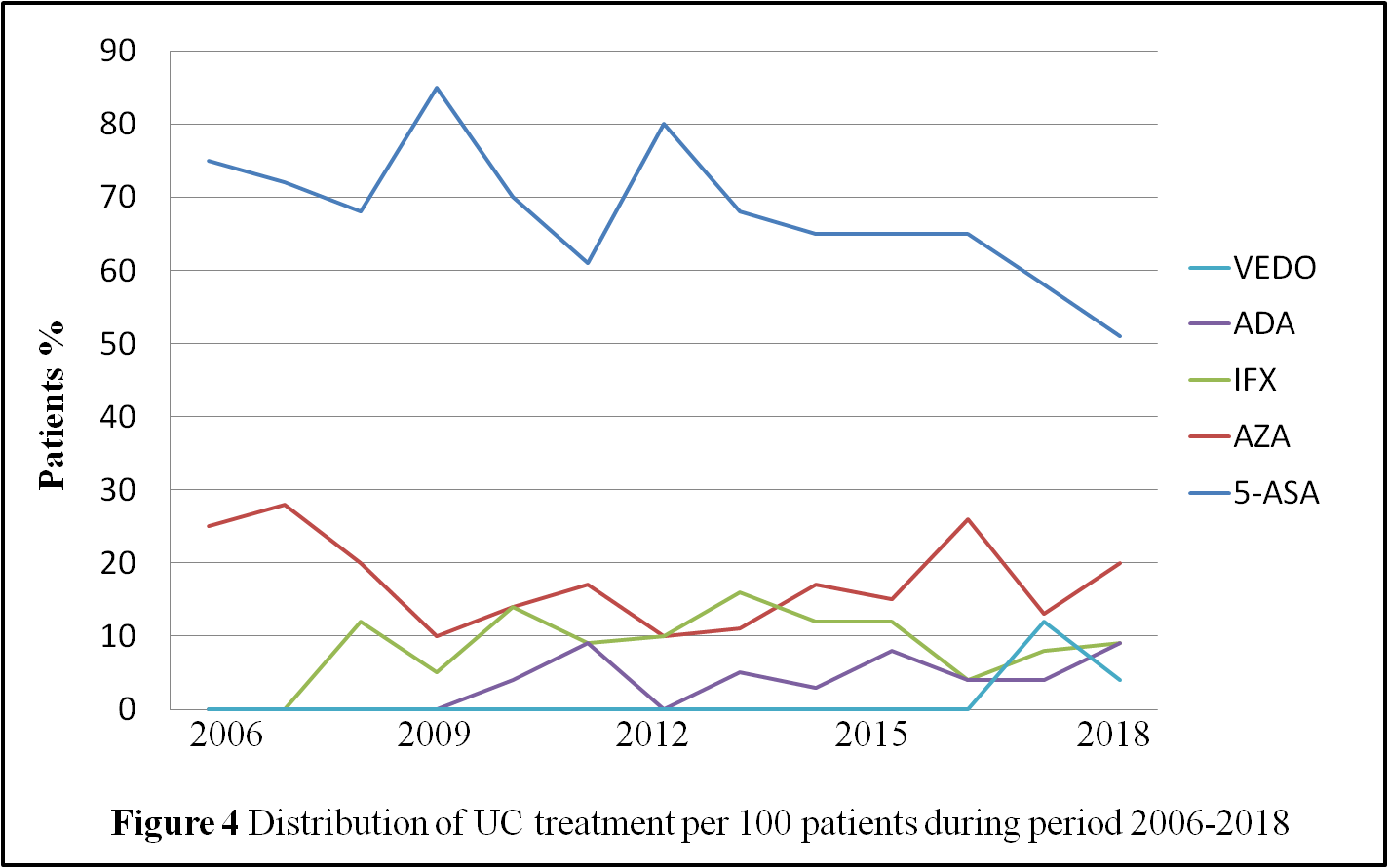 Prevalence of IBD in Greek recruits was 0.15% with a slight CD predominance. This is the first Greek epidemiological study that recorded also the provided treatment at the time of patient’s admission giving useful information upon IBD epidemiological profile in a wide region of our country and contributing to quantification of public health burden of those diseases in Greece.