Inflammatory Bowel Disease (IBD) is a multifactorial pathology with an increasing incidence. There are environmental factors, many unknown, that participate in its development. There is no study having assessed a possible relationship with residential radon exposure, which is very high in the study area. The aim of this study was to analyze if residential radon concentration measured at a municipal level is associated with a higher incidence of IBD and its characteristics (clinical or demographic).

We performed an ecological study where we included all incident cases of IBD in the area of Santiago de Compostela between January and December 2017 in order to estimate municipal incidence rates. Radon levels at a municipal level were obtained from the Galician Radon Map and correlated with demographic factors and type of IBD. We used the Spearman’s correlation coefficient to test the existence of any association.

96 patients were included, 63 (65.6%) with Ulcerative Colitis, 29 (30.25) with Crohn’s Disease and 4 (4.2%) with indeterminate colitis. Median age was 41 (IQR: 33.5 to 56 years), and 50.0% were women. The incidence rate per 100.000 inhabitants-year in the study area was 21.6 cases. The median radon concentration was 104.9Bq/m3 (IQR: 91.0  to 154.6), without statistically significant differences in function of the location of the house (rural vs. urban) nor the type of edification (flat vs house), p >0.05. There were no statistically significant differences on the type of IBD developed (ulcerative colitis, Crohn’s disease or indeterminate colitis) regarding radon levels either (p>0.05). There were no statistically significant differences (p>0.05) between radon and sex of IBD cases. No correlation between radon levels and age of the individuals was observed (Spearman’s rho = -0.13, p-value 0.2), nor radon levels variation by age groups (p>0.05). There was no correlation between radon concentration and cumulative incidence of IBD at municipal level (Spearman’s rho = 0.13, p-value 0.5), as it is shown in figure 1 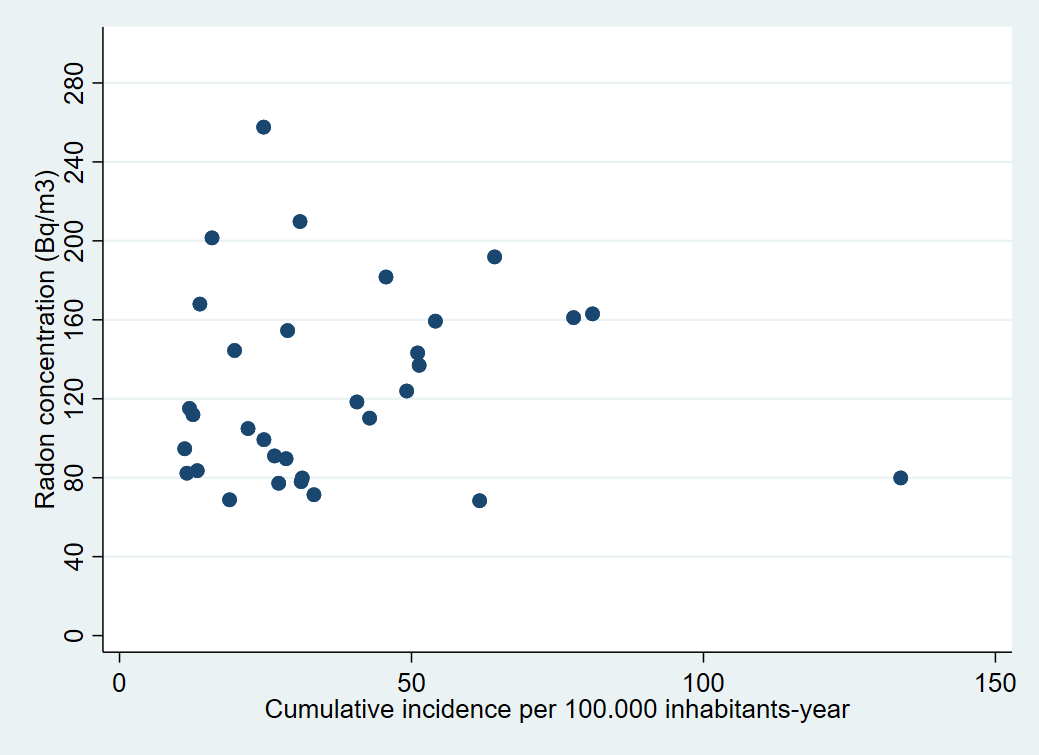 In the area of Santiago de Compostela there is a higher incidence of IBD in comparison with previous studies taking western countries as reference. It is possible that some environmental risk factors, could be responsible of this difference. In this study we have not found any correlation with municipal average radon concentration and incidence of IBD or any of its types.