In recent years, there was a growing interest in the modulation and manipulation of the intestinal flora to treat patients through fecal microbiota transplantation (FMT). Unfortunately, 2 cases of bacteremia via FMT in 2019 occurred in patients due to extended-spectrum beta–lactamase–producing E. coli from the same stool donor. However, one of the recipients did not get an active infection. So, the association between health status and bacterial ability to resist chemicals requires further investigations.

Totally, 63 E. coli strains from 32 fecal samples (14 CD patients and 18 controls) were whole-genome sequenced on the Miseq platform (project #0671-2020-0058). The strains were tested against 15 antibiotics by a disc-diffusion assay according to EUCAST guidelines. E. coli ATCC 25922 was used as a control. Antibiotic resistance genes were predicted by the Resistance Gene Identifier and CARD database.

All strains tested were susceptible only to meropenem (Figure 1). The proportion of multidrug-resistant strains in CD patients and controls did not differ significantly. Strains from both groups differed in sensitivity to amikacin and levofloxacin (Fisher’s exact test, p<0.1). Ciprofloxacin, widely used in therapy, was less effective against CD-derived strains (15%) compared to controls (3%). The inefficiency of fluoroquinolones could be due to plasmid-associated genes (qnrS1, qnrB19) and mutations in chromosome genes (gyrA, parC). Several strains carried aminoglycoside transferase genes, but only 1 CD-derived strain was non-sensitive. Susceptibility to tetracyclines did not differ between groups, and almost all strains, growing on the antibiotic, contained efflux pump genes (tetA, tetB, tetD, tetR). About half of the strains from both groups were active against penicillins carrying genes for class A (TEM-1, TEM-150) and D beta-lactamases (OXA-1). TEM-150 was only in control strains. Cephalosporin-resistant strains were in both groups and harbored AmpC type β-lactamases. Almost all strains had multidrug efflux systems (MdtEF-TolC, EmrAB-TolC, EmrKY-TolC, AcrAB-TolC), MdtG and AcrD efflux pumps, and their regulators. Although all strains contained pmrF and pmrC genes, only 1 CD-derived strain was non-sensitive to polymyxin. 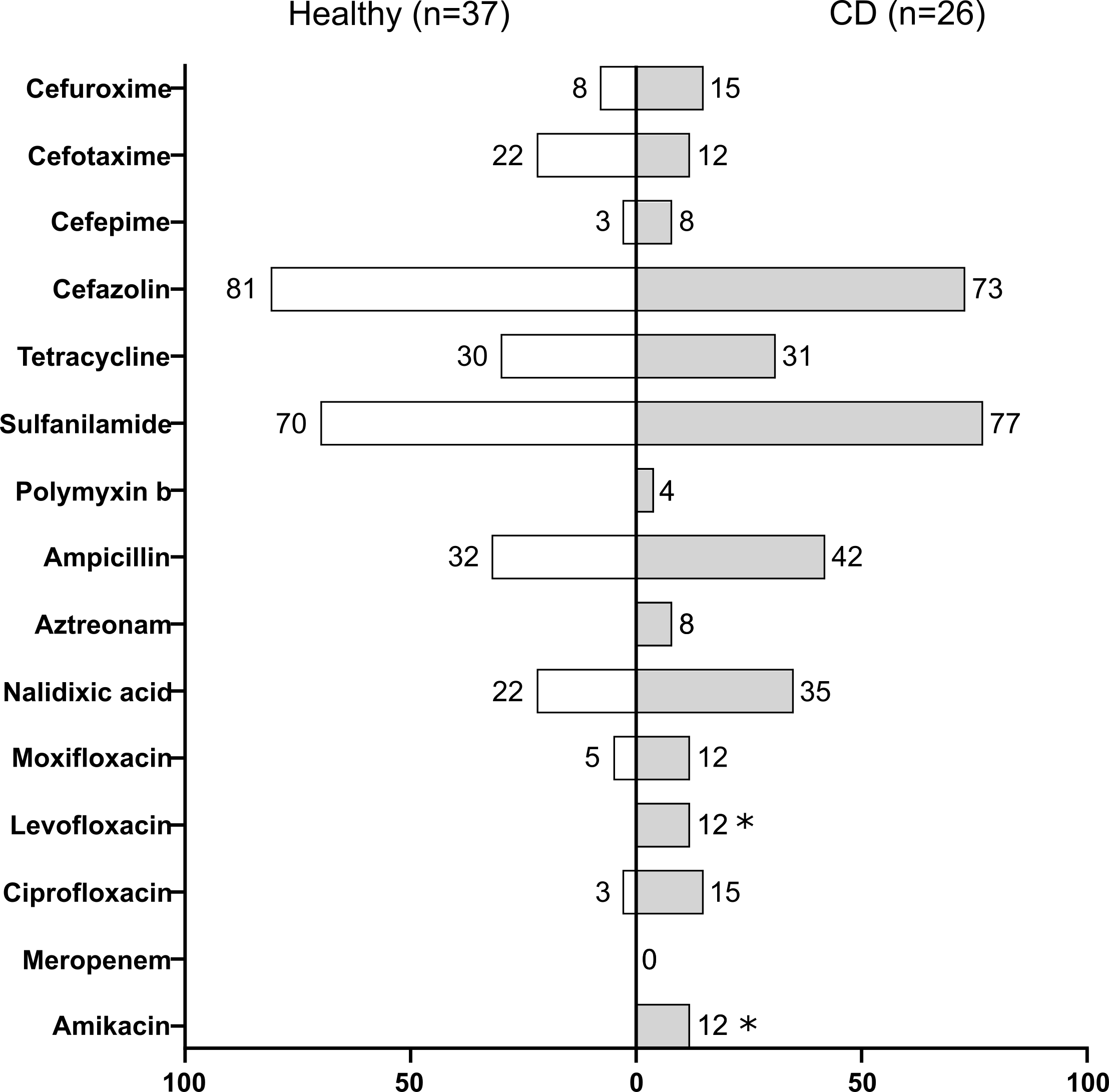 Thus, the differences in susceptibility between CD- and control-derived strains were revealed. However, E. coli strains from healthy subjects contained antibiotic resistance genes and demonstrated activity against antibiotics of various categories, which might be crucial and should be taken into account for a safe and effective therapy in the treatment of CD.