Crohn’s disease [CD] is characterized by severe transmural inflammation with subsequent destruction of the intestinal barrier. Recent works suggest that bacterial infiltration across this leaky gut facilitates access to the mesenteric fat and the development of a subsequent inflammatory reaction in the surrounding adipose tissue named creeping fat [CF]. Dysbiosis in CD patients has been associated with an increase in succinate-producing bacteria and a decrease in succinate-consuming bacteria. In fact, elevated succinate levels have been found in the intestinal and faeces of CD patients. Succinate has been classically considered as a marker of hypoxia and tissue damage, assisting as a pro-inflammatory signal that triggers immune activation. However, recent observations support potential additional functions of succinate. We and others have shown that succinate plays a key role in fine-tuning of the inflammatory response, acting both as an alarmin and resolving molecule. Our hypothesis is that succinate, a microbiota-derived metabolite, is a new determinant of adipose tissue dysfunction in CD.

A well-characterized cohort was used to obtained mesenteric adipose tissue biopsies including a) 10 subjects with active CD that require surgery for their underlying pathology b) 10 subjects with inactive CD and c) 10 healthy controls undergoing surgery for non-acute process (herniorrhaphy, cholecystectomy for lithiasis, etc.). The groups were comparable in age, sex, and body mass index. We studied the effect of exogenous succinate in adipose tissue explants, adipose-stem cells (ASC), and adipose tissue macrophages (ATM) isolated from adipose tissue biopsies of CD patients with different clinical activity. Circulating succinate levels and inflammatory variables including hs-CRP and faecal calprotectin were also measured.

We observed an increased expression of SUCNR1 in CF, including ASCs and ATMs, mainly in patients suffering from an active disease (figure 1A). Furthermore, succinate appears to elicit a different response in adipose tissue from CD patients, when activity status is considered. Thus, our results indicate that in an inflammatory local and systemic environment, such as occurs in CD active patients, succinate triggers a pro-inflammatory response in VAT depot, while when subjects are in a remission period, the response of VAT explants to succinate is similar to than the observed in healthy subjects, promoting an anti-inflammatory expression profile (Figure 1B). Interestingly, we found elevated circulating succinate levels in active CD patients but those decrease drastically in patients in remission of the disease (Figure 1C). 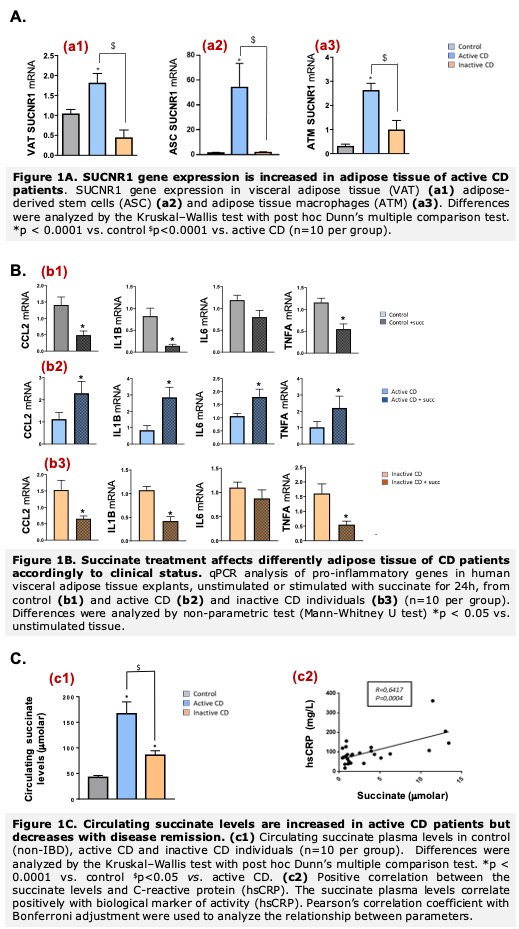 Succinate has a relevant role in adipose tissue dysfunction in CD.