Cell functions are regulated by signalling pathways that often cross-talk with each other. These cross-talks are usually cell-type specific and, as we showed earlier, often mediated by so called critical paralog proteins (proteins resulted due to gene duplication but then diverged both in terms of their regulation and their functions). As dysregulation of cell functions is a hallmark of chronic inflammatory diseases, including Ulcerative Colitis (UC), here we investigated the role of such critical paralog proteins in the regulation of some key functions, in UC-associated cell types.

We focused our analysis on the Notch pathway-related processes, in particular the EGLN paralogs (EGLN1-3). The EGLN enzymes are prolyl hydroxylases and EGLN1, EGLN3 can directly inhibit the HIF1A transcription factor, while HIF1A induces the expression of all the three EGLN gene upon hypoxia. This negative feedback loop tends to control the amount of EGLNs and the activation status of the HIF1A proteins, therefore maintaining an adequate hypoxia response. In the intestine, EGLN2 and EGLN3 are described as potential regulators of inflammation, and both are downregulated in UC patients. Importantly, we found that the expression of EGLN paralogs shows cell-type and condition specificity. While goblet cells express all three paralogs in both healthy and UC conditions, myofibroblasts express EGLN3 only in the healthy condition. As EGLN3 is responsible for tight junction integrity, and it can regulate hypoxia response, the lack of EGLN3 in UC could contribute to the disrupted epithelial barrier function and dysregulation of myofibroblasts. Accordingly, in mice, depletion of Egln3 causes an increased susceptibility to colitis.

We have developed a bioinformatic pipeline to reconstruct cell-type specific signalling networks to identify the key differences among critical regulators of the signalling flow (ie., critical paralog proteins) in UC-associated cell types and in comparison of healthy and non-inflamed UC conditions. We analysed the altered expression of paralog genes in signalling pathways in UC-associated cell-types, and demonstrated their role with the condition and cell-type specific expression of EGLN3. 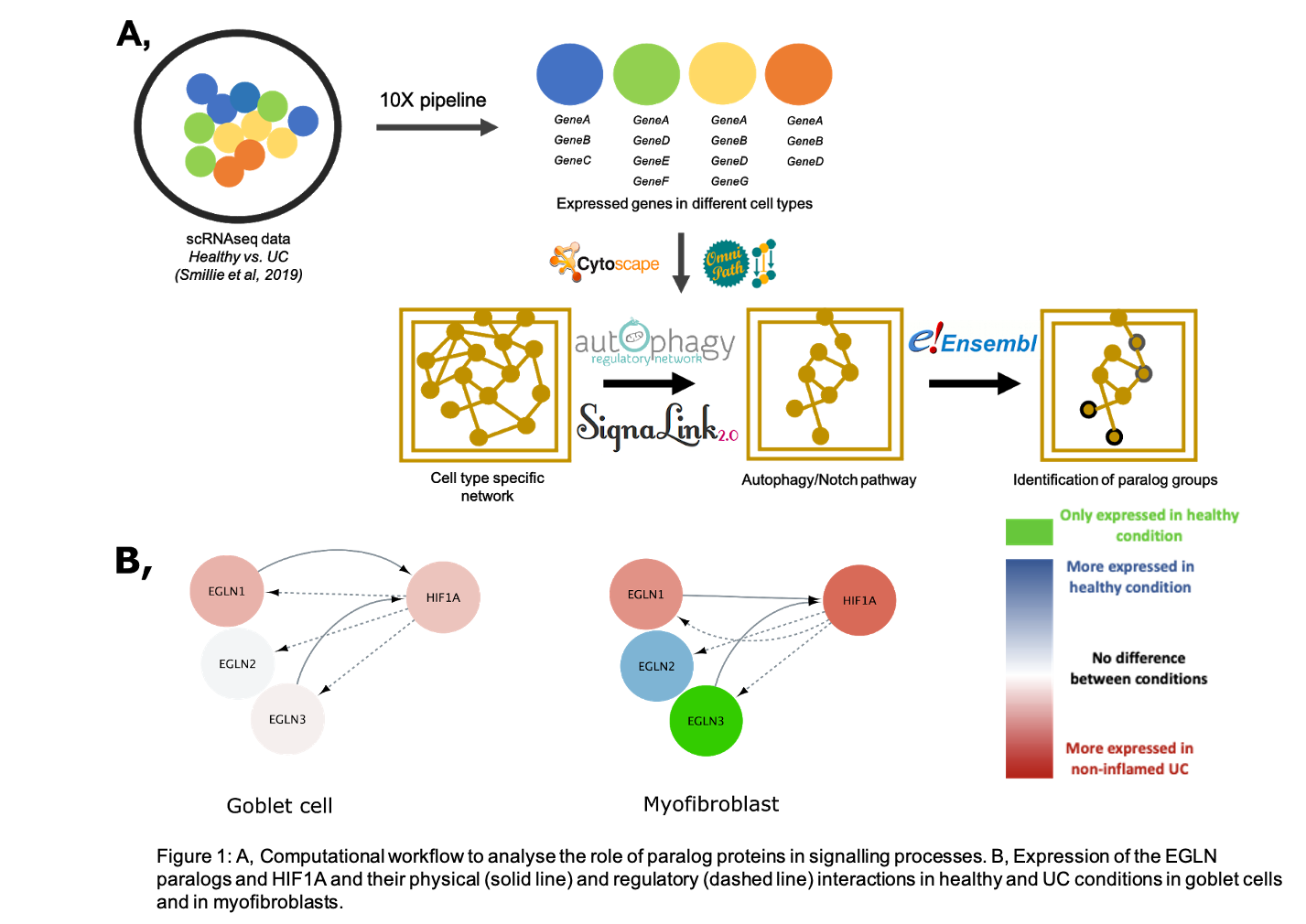