Accurately predicting disease course at diagnosis is critical to facilitate personalized therapy in inflammatory bowel disease (IBD). PredictSURE IBDTM is a whole blood qPCR assay that was developed to predict prognosis in newly diagnosed, treatment-naïve IBD patients – classifying them into IBDhi (high-risk) or IBDlo (low-risk). The current recommendation is that PredictSURE IBDTM should not be used in those who have commenced steroids. In this study, we aimed to determine the impact of steroid therapy on the performance of PredictSURE IBDTM .

Whole blood was serially taken from patients admitted with severe IBD requiring intravenous (IV) steroids (pre-steroid, day 3, day 5; n=10, cohort 1) and from patients receiving oral steroids as outpatients (pre-steroid, week 1, week 6; n=10, cohort 2). An independent cohort of 43 IBD patients, all within 3 months of diagnosis and on corticosteroid treatment (41 systemic and 2 topical, cohort 3) was recruited. RNA was extracted and analyzed with PredictSURE IBDTM (PredictImmune, UK). Patients were prospectively followed and treated according to routine clinical management by physicians blinded to the test results, and clinically stratified according to one of the original definitions used to construct and validate the test (need for step up to immunosuppressive or biological therapy or surgery).

In cohorts 1 and 2, both oral and intravenous steroids affected the PredictSURE IBDTM result: misclassification as IBDlo occurred in 5/8 IBDhi patients receiving oral, and 5/7 IBDhi patients receiving IV, steroids. In 60% this change was detectable early (within 1 week of oral steroids and 3 days of IV steroids). Steroids did not affect the classification of IBDlo patients. Consistently, the prognostic accuracy was limited in patients already receiving steroids (cohort 3). After a median follow-up of 31.8 [IQR 18.7 - 42.1] months, 35 (81%) patients required step-up therapy. PredictSure IBDTM correctly classified only 23 (54%) patients with accuracy of 0.53 (sensitivity: 0.51, specificity: 0.63, positive likelihood ratio: 1.38, negative likelihood ratio: 0.77). Seventeen (80%) of the misclassifications were clinically high-risk patients who were predicted as IBDlo. Time to treatment escalation was similar between patients classified as IBDhi or IBDlo after starting steroid therapy (p= 0.47) (Figure 1). 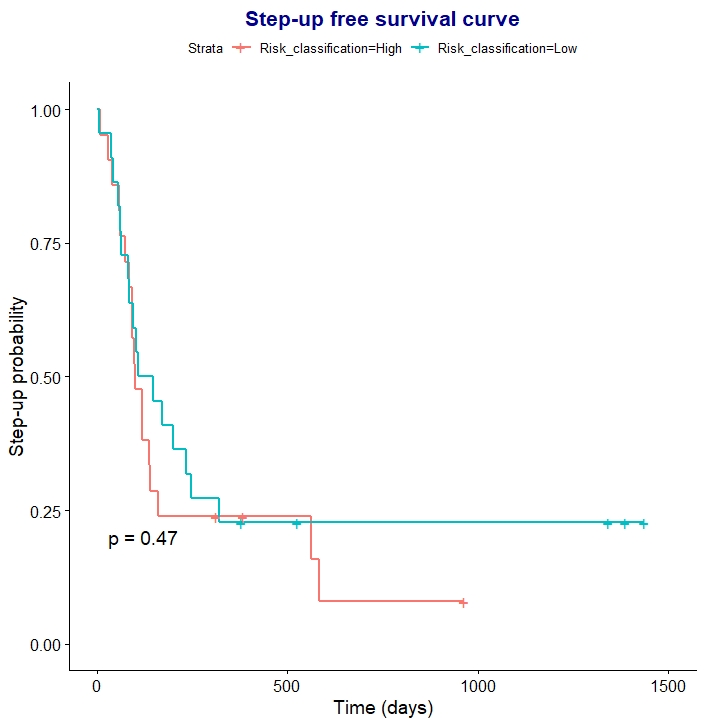 The prognostic accuracy of PredictSURE IBDTM is limited if performed after steroid therapy has begun, most likely because of the misclassification of high-risk patients as low risk. Therefore, the test should only be performed in patients with active disease who are not receiving steroid therapy, as currently recommended.