Immunobiological antibodies to tumor necrosis factor alpha (TNFα), act by decreasing the proinflammatory cytokine TNFα. In this context, patients using these biologicals may develop an immunocompromised state (1). TNFα is important in the activation, differentiation and recruitment of different immune cells, with an important role in the formation and maintenance of granulomas, in response to intracellular organisms (2), such as tuberculosis (TB), whose reports occur, on average, 12 weeks after onset of the biological (1). Neurotuberculosis (NT) is the most severe form of TB (3), being responsible for 5 to 7% of cases of extra-pulmonary involvement (4,5).  Its diagnosis being based on suspicious symptoms, biochemical analysis of the cerebrospinal fluid (CSF) and confirmed by the detection of the TB bacillus in the CSF. TB in the central nervous system (CNS) is usually due to the spread of pulmonary infection, and rarely occurs in isolation as in this case we are reporting.

This study aims to report a case of NT was described in patient with Ulcerative Colitis (UC), 4 years after the start of therapy with biological, and discuss clinical aspects, diagnosis, management and prognosis.

34-year-old woman with UC since the age of 20, using adalimumab for 4 years, presented with progressive headache for 20 days, associated with daily afternoon fever (38⁰C). She denied any contact or familiar with TB. Analysis of CSF revealed TB culture positive. On brain MRI, there were small cortical lesions in the left frontal lobe and two larger lesions, with post-contrast enhancement, in the left temporal lobe and in the right frontal lobe, both measuring about 10 mm (Figure 1). She was in sustained deep remission with adalimumab for 4 years (Figure 2). She has had a chest X-ray and a tuberculin test every year, all of which are negative for TB. The initial management was discontinuing adalimumab, treatment with rifampicin, isoniazid, ethambutol, pyrazinamide and prednisone. The patient showed clinical and neurological improvement. Currently, 12 months after the diagnosis, she is asymptomatic and without neurological sequelae. 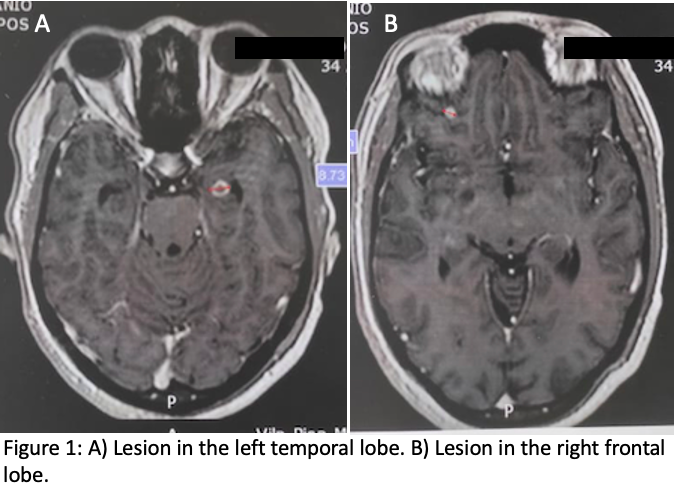 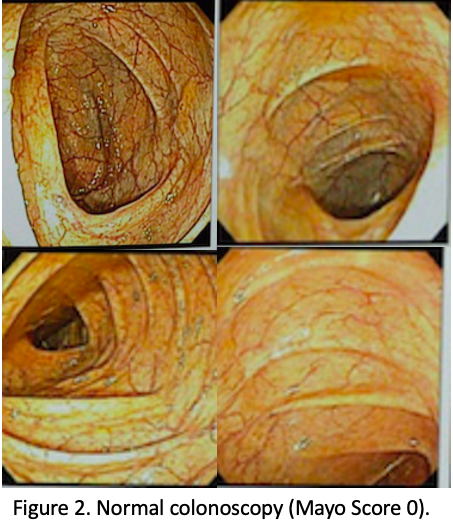 The reported case assumes importance because this patient has isolated TB in the CNSDigitar texto   without pulmonary involvement who has UC and was using adalimumab. Screening tests for TB can ignore latent infection, especially in patients undergoing immunosuppression (anti-TNF, steroids and HIV). The possibility of TB should always be considered in the presence of fever of unknown origin in patients on anti-TNFα therapy, even for a long period. Early recognition, suspension and appropriate treatment are important steps towards therapeutic success, avoiding neurological sequelae and mortality.